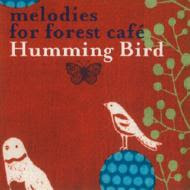 "Humming Bird: melodies for forest café" is being released today, September 26, 2007, in Japan, distributed by Rambling Records, a company that already issued some JSR albums (such as Palmyra & Levita/João Donato's "Lucy in the Sky with Bossa Diamonds" and Mario Castro-Neves & Samba S.A.'s "On a Clear Bossa Day") in the Japanese market.

The opening track is "O Passarinho", the song co-written by Arnaldo DeSouteiro, Ithamara Koorax and Gazzara which became a radio and dancefloor hit in this European summer. Now, it's destined to achieve similar success in Japan and other Asian countries.