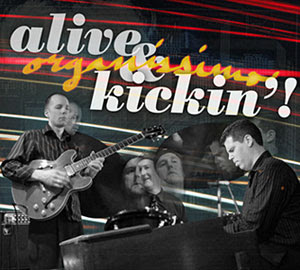 In the ten years since its formation, organissimo has cultivated a unique soul-jazz brew that's won them legions of fans by virtue of their three popular studio CDs and a regular performance schedule. Now the Michigan band plans to serve up double helpings of their innovative organ trio sounds by releasing their first live CD, "Alive & Kickin'" and first DVD, "Backstage Pass." Both discs are due April 6 from the trio's Big O Records.

The CD "fills a long-lamented gap," writes CD annotator Lawrence Cosentino. "The best way to experience organissimo's tightrope equipoise, percolating joy and spooky rapport is to hear and see it in person."

Organist Jim Alfredson, guitarist Joe Gloss, and drummer Randy Marsh groove as one in both formats. The CD, their fourth, was recorded in April 2009 in the studios of WKAR-TV at Michigan State University in East Lansing. Two bonus tracks, Frank Zappa's "Blessed Relief" and the organissimo rave-up "Pumpkin Pie," were cut the previous year at the trio's Grand Rapids stomping ground, Founders Brewing Co.

The 75-minute DVD presents the entire WKAR-TV session (taped as part of the station's Backstage Pass series), including two bonus tracks not heard on the CD.

"Alive & Kickin'" provides an excellent introduction to the group in that it contains smoldering new versions of original tunes penned by Alfredson, Gloss, and Marsh from organissimo's first three CDs on Big O Records -- "Waiting for the Boogaloo Sisters..." (2003), "This Is the Place!" (2005), and "Groovadelphia" (2008).

The inclusion here of a Zappa track, and the appearance of another on "This Is the Place!" ("Peaches en Regalia") -- which was the first non-organissimo original to be recorded by the trio -- suggests a serious kinship with the late composer.

"Frank Zappa was such an influential musician in so many ways, and I don't think he's been given the treatment he deserves," says Alfredson. "A lot of his material works very well in a jazz context, and it works so well with our approach, through-composed combined with improvisation. Randy, our drummer, was a huge fan, and saw him many times. He was the one who first brought up the idea. It fit into what I was doing at the time with progressive rock. 'Peaches' has become a hit for us in our live shows." 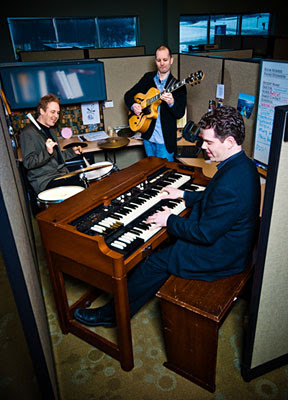 During their decade together as organissimo, Alfredson, Gloss, and Marsh have garnered high praise for their performances at such venues as Baker's Keyboard Lounge in Detroit, the Green Mill in Chicago, the Jazz Kitchen in Indianapolis, and Chris' Jazz Café in Philadelphia and at festivals in Chicago, Detroit, Syracuse, Rochester, and Tel-Aviv, as well as from such publications as Downbeat, JazzTimes, JazzWeek, Cadence, the Detroit Free Press, and the Chicago Tribune. Groovadelphia, the group's previous CD, spent three weeks at #1 on the CMJ Top 40 jazz chart and stayed in the JazzWeek Top 50 for 14 weeks.

"I'm proud of our longevity, which is pretty good for a jazz group," says Alfredson. "It seems that, a lot of times in the jazz world, there's a leader who has some guys working with him. But what we're after is a group sound and a group approach. Being in Michigan, we've built up a reputation, and the audience comes out to see us."