DVD of the Day - "Lesbian Nation" 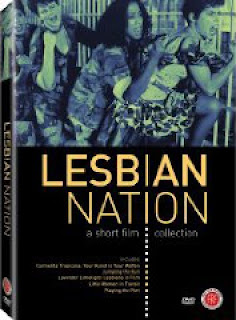 This entertaining collection of lesbian-friendly cinema features five films, four of them making their premiere on DVD.

PLAYING THE PART - A college girl wants to come out to her parents, but her angst-ridden efforts keep on ending in futility. "Enthralling." -New York Times "One of the Year's Best Short Films" -Film Comment

JUMPING THE GUN - The morning after a one-night stand, a woman fantasizes about her life together with the sleeping beauty, from honeymoon to breakup. "An intriguing romantic fantasy." -New York Times

LITTLE WOMEN IN TRANSIT - 12-year-old Jennie is seated in the back seat of the station wagon, wedged between her two jeering sisters, enduring that special hell - the family car trip.

LAVENDER LIMELIGHT: From GO FISH to PARIS IS BURNING to THE WATERMELON WOMAN, this festival favorite goes behind the scenes to reveal seven successful lesbian directors as they explore their sexual identity, growing up gay, inspirations and techniques, Hollywood vs. Indie, and of course, love and sex, onscreen and off. Featuring Cheryl Dunye, Rose Troche, Jennie Livingston, Monika Treut, Maria Maggenti, Su Friedrich and Heather MacDonald.
Posted by Arnaldo DeSouteiro at 6:37 AM