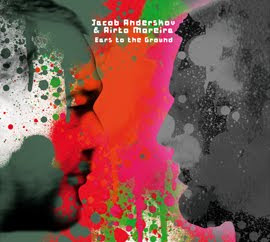 CD of the Day
Jacob Anderskov & Airto Moreira: "Ears to the Ground" (ILK)

For his performance on "Ears in the Ground," Airto was voted Best Percussionist of the Year in the 31st Annual Jazz Station Poll:
http://jazzstation-oblogdearnaldodesouteiros.blogspot.com/2009/12/best-jazz-of-2009.html

Not yet a household name in the USA jazz circles, the pianist, composer & band-leader Jacob Anderskov has made a comet-like career in recent years. He is mostly known from his own bands Anderskov Accident & Jacob Anderskov Trio (with Michael Formanek & Anders Mogensen), Doctor Structure & bOBs tUMbla (with Jim Black, co-lead with Anders Banke). Since his 2 simultaneous debut CD's from 2001, he has released no less than 8 CD's as a bandleader, received 2 Danish Jazz Music Awards and an Art Council awarding of the CD Jacob Anderskov Trio: "even worse" and a 3-year working grant from Statens Kunstfond.

His music has been described as "ancient nordic fairytale flower that slowly opens up and takes new colors, while you are at first gaping and amazed, later moved by its richness and satisfying beaty. Great art, and warmly recommended. " (Peter Rahbek, Jazz Special, February 2003). Other quotes state that “On the Loose, the trio's third outing is easily on the level of-if not more elevated than-similar sessions by North American mainstream pianists of a comparable age.” - Ken Waxman, onefinalnote (Canada), May, 2005. And that “Anderskov underscores his position as one of the most important and incisive soloists of his generation”. - Christian Munk-Hansen, Information, 29/12 2004.

Jacob Anderskov graduated from Rhythmic Music Conservatory, Copenhagen, from the "musician's line", in 2002. He has also studied at the University of Copenhagen (Music Science), and has been taking private lessons with numerous teachers during a 1 year stay in New York 1999-2000. As a bandleader he has performed in most European countries & in USA & Canada. He has besides that also performed and recorded as a sideman with a large number of other musicians & bands, a.o. Lovedale, Cph Art Ensemble & Pasborg's & Mockunas's Toxicum.
Posted by Arnaldo DeSouteiro at 9:03 AM