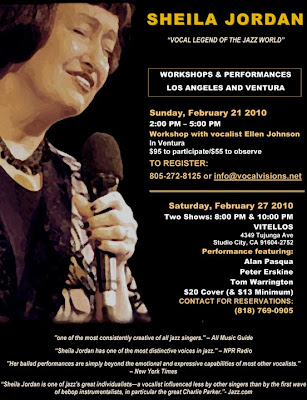 One of the few remaining legends of jazz vocals and called "one of the most distinctive voices in jazz" according to National Public Radio (NPR), Sheila Jordan brings her extraordinary bebop style and knowledge to Ventura and Los Angeles, California. Sheila has performed and recorded with some of the worlds greatest musicians including Charles Mingus, Steve Kuhn, Bobby McFerrin, Mark Murphy, Kurt Elling and countless others, spreading her message of love for the music of jazz wherever she travels.

Jordan's singing began in Detroit during the 1940's where she was inspired by Charlie Parker who was her "musical guru" and dear friend. Ms Jordan is best known for her innovative bass and voice recordings and for being the first recorded jazz singer on the 1962 debut Blue Note recording Portrait of Sheila.

On Sunday, February 21st from 2 PM to 5 PM she will give a joint workshop, with top-class jazz vocalist and educator Ellen Johnson, in Ventura. The two are collaborating on a biography of Sheila Jordan's life and music that they plan to have available later in the year. For more information or to register for the workshop go to www.VocalVisions.net, call 805-272-8125 or email info@vocalvisions.net.

Then on Saturday, February 27th Ms Jordan will be performing with a phenomenal trio of some of the most respected jazz musicians in the world: Alan Pasqua (piano), Peter Erskine (drums) and Tom Warrinton (bass), at Vitellos in Studio City with two shows at 8 PM and 10 PM. To make reservations or for more information contact: 818-769-0905 or www.vitellosrestaurant.com
For more information about Sheila Jordan visit her website at: http://www.SheilaJordanJazz.com 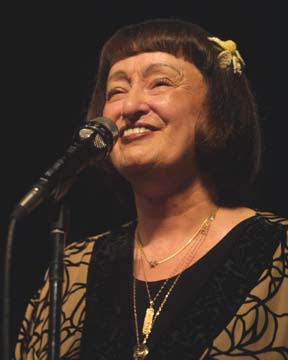 The prestigious All Music Guide website says that vocalist Sheila Jordan is "one of the most consistently creative of all jazz singers." Setting the bar in jazz by being the first recorded jazz singer on the 1962 debut Blue Note recording "Portrait of Sheila" and "You Are My Sunshine" with George Russell's The Outer View, Jordan has since become an iconic jazz figure, influencing many other artists in the jazz vocal genre. The New York Times raves, "Her ballad performances are simply beyond the emotional and expressive capabilities of most other vocalists."

Sheila has performed and recorded with some of the worlds greatest musicians spreading her message of love for the music of jazz wherever she travels. Jordan's singing began in Detroit during the 1940's where she was initially inspired by Charlie Parker, her "musical guru" and dear friend. She honed her skills, sitting in with Parker and other musicians when they came to town to perform in the Bluebird, the Sudan and other local clubs.

Moving to New York City in the early 50s, she sang in Greenwich Village clubs and at jam sessions with some of the city's jazz giants, including Charles Mingus and Herbie Nichols, and studied with legendary pianist Lennie Tristano. After touring with trombonist Roswell Rudd in the late 70s, Jordan became a founding member of the Steve Kuhn Quartet, where she met bassist Harvie S. (formerly known as Swartz). Soon afterward, she and Harvie formed one of the most innovative bass and voice duets where they both traveled extensively, both nationally and internationally. Her love for the bass continued with recordings and performances with bassist Cameron Brown and their most recent recordings, "I've Grown Accustomed to the Bass," "The Very Thought of Two" and "Celebration - Live at the Triad (NYC)."

For much of the last 30 years, like her colleague (and my dear friend) Mark Murphy, with whom she recorded the landmark CD "One for Junior" for Muse in 1991 - arranged by Bill Mays and featuring Harvie Swartz on bass - Jordan has been extremely active in teaching young students the ropes of jazz singing, and has made her living by combination of touring and teaching. Sheila initiated the jazz vocal program at New York City's City College, has been a faculty member of "Jazz in July" at the University of Massachusetts ((Amherst), visiting professor at Stanford University, taught at the New School for Social Research, Manhattan School of Music, Musica Hochschule in Graz, Austria and continues to teach workshops throughout the world.

Sheila Jordan has appeared in festivals and clubs both nationally and internationally with rave reviews from critics even at the age of 81. She has received two National Endowment for the Arts fellowships, the Lil Hardin Armstrong Jazz Heritage Award for Excellence the IAJE Humanitarian Award, New York City MAC Award, New York Nightlife Award and the Mary Lou Williams Women in Jazz for Lifetime of Service Award. Down Beat's International Critics Poll has named her the winner of "Talent Deserving Wider Recognition" honors nine times and has placed her among the top five singers in the "Established Talent" category every year since 1980. For more information about Ms Jordan go to: http://www.sheilajordanjazz.com

Posted by Arnaldo DeSouteiro at 9:00 AM