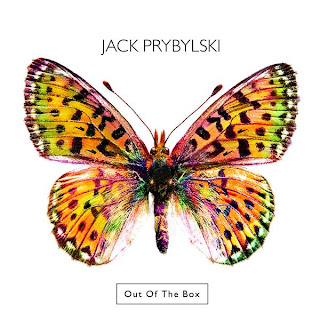 What do you get when you combine elements of trance, steeped in a generous underlayment of rhythm with a heat-infused saxophone that is masterfully caressed by one very bad cat? You get a pass on a very trippy vibe that some might say is "Out of the Box."

Produced by Four 80 East (one of the hottest bands that has existed to defy all the rules), Out of the Box (Innervision Records) is the third solo release by saxophonist Jack Prybylski. Prybylski initially caught the ear of radio with his sophomore release, Window Shopping, by garnering national praise from critics for his smooth melodic style. "Jacks instantly appealing music and strong sound make Window Shopping one of the best independent releases this year," declared Smooth Jazz News.

However, unbeknownst to smooth jazz fans, Prybylski cut his teeth on the bandstand playing with respected working bands like Them Jazzbeards, which included components of the West Coast cool sound. With a resume that includes a master's degree in music, esteemed education credentials and having won "Saxophonist of the Year" ten times in Buffalo, Prybylski has a serious background steeped in a rich mixture of jazz, rock and blues history.

Working with Four 80 East on Out of the Box gave Prybylski the chance to materialize the artistic breadth of the bandstand to studio track without losing his established radio friendly appeal. The result was a sound that brings his contemporary jazz journey full circle.

"I was totally blown away by the ideas Tony and Rob [Four 80 East] brought to the table. I wanted something a little more aggressive and a little less safe than the previous releases. Sometimes it's fun to color outside of the lines."

The first single to go to radio was Ice Cream, which was warmly greeted by radio and fans alike. On February 16, 2010, Do Ya Think I'm Sexy, a hit tune that was first recorded by Rod Stewart in the late 70s was released as the second single to radio. Rather than just do a straight remake, Prybylski and Four 80 East infused the song with a European club vibe. The song simmers and twists itself within an understated saucy groove. The result is a chilled out nighttime tapestry leaving the listener desiring more.

Sample the new single at: http://www.reverbnation.com/tunepak/2386553

"Out of the Box" will be supported by a full publicity campaign and national concert appearances. For more information, logon to www.jackprybylski.com

Jack is currently endorsed by Yamaha saxophones, Rico reeds, Applied Microphone Technology microphones, Theo Wanne saxophone mouthpieces and Saxrax saxophone stands. As an endorsee and clinician, he has performed clinics and concerts throughout the United States as well as Mexico and countries of the Pacific Rim.
Posted by Arnaldo DeSouteiro at 7:37 AM