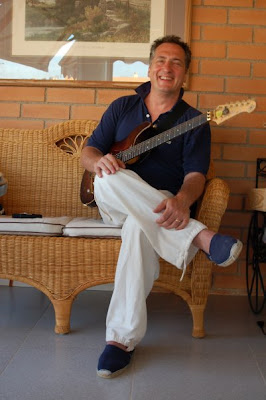 The post-fusion group Fourplay invited Chuck Loeb to join the band, taking over the guitar chair from the amazing Larry Carlton, who had replaced Lee Ritenour, Fourplay's original guitarist and co-founding member.

"As you can imagine, I was honored and excited to accept the opportunity to create music with three of the greatest musicians on the planet: Nathan East, Bob James and Harvey Mason. Thanks guys - can't wait for the first gig!" says Loeb, who released several albums as a leader for such labels as DMP and Shanachie, also having recorded as a sideman with Larry Coryell, Jim Hall, Donald Harrison, Stan Getz, Eddie Daniels, Bob James, Till Bronner, Nelson Rangell, Bob Mintzer, Gary Burton, Rebecca Parris, Carly Simon, Michel Camilo, Michael Franks, Andy Snitzer, Warren Bernhardt, Gato Barbieri, Andy LaVerne, Jon Lucien, and with his wife, singer Carmen Cuesta-Loeb, among many others.
The Fourplay official notes follows:
Fourplay officially welcomes Chuck Loeb!

FOURPLAY has had the distinct privilege of enjoying the past 12 years of its 20 year history with legendary guitarist Larry Carlton.
As Larry takes his leave to delve further into his solo career, the band extends their heartfelt gratitude for his contributions and wishes him continued success in all his pursuits. Larry Carlton will remain an integral part of our musical family & legacy.

FOURPLAY now welcomes its newest member, multi-faceted virtuoso guitarist, Chuck Loeb.
His musical contributions will undoubtedly enhance the creativity and pursuit of excellence FOURPLAY has enjoyed in the studio and on the stage.

FOURPLAY thanks its many loyal fans and promises that this latest incarnation will inspire the band to explore new avenues of creativity while maintaining its core musical values.
Posted by Arnaldo DeSouteiro at 11:18 AM