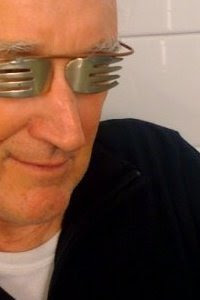 Brazilian Zouk Photo Exhibition by one of the all-time world's greatest photographers, Alen MacWeeney, at Lava Gina (116 Avenue C, New York, NY, 10009) in the East Village, from February 25 to March 25, 2010.

This Thursday, February 25, 2010, marks the official opening of the Brazilian Zouk Photo Exhibition by Alen MacWeeney at the Lava Gina, World Music Lounge in the East Village. This exhibition is the first stage of what he hopes will be a much more larger exhibition later on down the road.

Born in Dublin, Alen MacWeeney began his international career at twenty, in Paris, as Richard Avedon’s assistant. Across a half-century, he’s become especially known for his ability to artistically photograph interiors, countrysides, portraits, and even people’s inner lives. His work has appeared in LIFE, The New Yorker, Vogue, The New York Times Magazine, GEO, Fortune, Harper’s Bazaar, Smithsonian, Esquire, American Photographer, G.Q. as well as in many covers of famous jazz albums. His pictures are in many private collections and in the permanent collections at the Museum of Modern Art, the Metropolitan Museum of Art, the George Eastman House, the Philadelphia Museum of Art, the Art Institute of Chicago, and others. 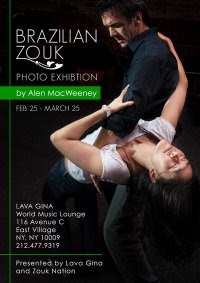 Still in his teens, Arnaldo DeSouteiro became acquainted with Alan MacWeeney's artistry through the many pictures done for albums by such artists as Stanley Turrentine (that mysterious shot for "Don't Mess With Mr. T"), Gabor Szabo, Edgar Winter, Eumir Deodato (the fantastic cover pics for "Deodato 2" and "Whirlwinds"), Ron Carter ("Anything Goes"), Esther Phillips, Grover Washington, Jr. (the famous shots for the best-selling Kudu items "Mister Magic" and "Feels So Good"), Average White Band, Todd Rundgreen, The Fatback Band, George Benson, Joe Farrell, Airto Moreira, Art Farmer, Joe Henderson, Idris Muhammad (another landmark pic for "The House of the Rising Sun") and many others.
During the 70s, Alen was part of the CTI history, along with other great photographers like Pete Turner and Duane Michals, often collaborating with album designers Bob Ciano and Rene Schumacher for Creed Taylor's brilliant projects. The destinity brought DeSouteiro and MacWeeney together when the Brazilian producer was invited to supervise the first CD reissues (released in Japan) for many of those groundbreaking CTI/Kudu albums, including Ron Carter's "Anything Goes" and Idris Muhammad's "The House of the Rising Sun." Read a fascinating Nicholas Bambo's interview with Alen MacWeeney along with some photos from the Brazilian Zouk Photo Exhibition which opens this week at Lava Gina in the East Vilage.
http://www.zouknation.net/blog/interview/alen-macweeney-interview-part-1/
http://www.zouknation.net/blog/interview/alen-macweeney-interview-part-2/
Posted by Arnaldo DeSouteiro at 7:41 AM