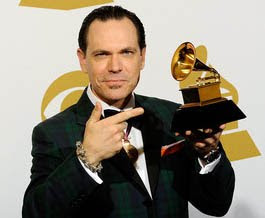 "Dedicated to You: Kurt Elling Sings the Music of Coltrane and Hartman" won the GRAMMY for Best Jazz Vocal Album at the 52nd GRAMMY Awards, January 31. Kurt co-hosted the gala Pre-Telecast Awards Ceremony and performed "God Bless the Child" with Lalah Hathaway. You can watch the podcast of the GRAMMY Pre-Telecast at www.grammy.com/live
It will be available through February.

The East Coast run visits eleven states. It began on February 5, 2010 at the University of Connecticut in Storrs, and will finish on February 28 at the University of Alabama in Birmingham. The second leg of the tour begins on the West Coast in Bellingham, Washington on April 14, 2010, and continues with an additional sixteen shows in six states, ending in Detroit, Michigan, on May 1, 2010.

Get your tickets soon, because these shows will sell out. (Scroll down for dates and ticket links.)For a preview of Kurt and the All-Stars performing "When I Grow Too Old to Dream," click here.