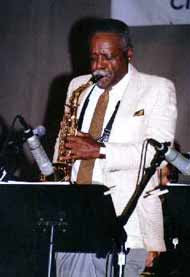 David 'Fathead' Newman dies at 75; jazz saxophonist
By Jon Thurber, Los Angeles Times
January 23, 2009
David "Fathead" Newman, a jazz saxophonist who was a key member of Ray Charles' band for a dozen years and later became a high-profile session player, has died. He was 75. Newman died Tuesday of pancreatic cancer at a hospital in Kingston, N.Y., according to his wife and manager, Karen Newman.

Newman's saxophone can be heard on many of Charles' landmark hits, including "I Got a Woman," "What'd I Say" and "Lonely Avenue." And it was Charles who helped Newman get his first album as a leader with the 1958 Atlantic Records release "Fathead: Ray Charles Presents David Newman."

Newman was born in Corsicana, Texas, on Feb. 24, 1933, but grew up in Dallas, where he studied first the piano and then the saxophone. He earned the nickname "Fathead" from his high school band teacher because he stubbornly refused to learn to read music, preferring instead to take it in by ear.

He went off to Jarvis Christian College on a music and theology scholarship but quit school after three years and began playing professionally, mostly jazz and blues, with a number of musicians, including Buster Smith, Lloyd Glenn, Lowell Fulson and T-Bone Walker. "I was brought up a bebop musician but it wasn't so acceptable, especially in Dallas," Newman told the Dallas Morning News some years ago. "You couldn't make a living doing that, so I had to play rhythm and blues. I adapted to it easily, being from an area where blues was prevalent."

He was playing in Smith's band in the early 1950s when he met Charles, who was then a piano-playing sideman for Fulson. The two hit it off immediately. Charles loved Newman's sound for its lyricism and sweetness and vowed to bring him aboard when he started his own band, which he did in 1954. The multifaceted Newman first played baritone saxophone for Charles but switched to tenor and became a star soloist.

"He really extended my music because he was into so many different types of music," Newman told the Canadian newspaper Ottawa Citizen in 2007. "I didn't really appreciate anything except bebop before I met Ray."

"In 1960 he started having a big band, an orchestra," Newman told the Tennessean newspaper some years ago. "Ray did all the arranging. He wouldn't even touch the piano, and he never wrote anything in Braille. He had perfect pitch. He would dictate a part and all you had to do was take notation and you'd have the arrangement. Ray Charles was a phenomenal musician."

After leaving Charles' band, Newman moved on to play with Herbie Mann's band in 1970-71 and recorded several more albums for Atlantic as well as Warner Bros., Fantasy Records and Muse.

Newman's versatility on reed instruments made him a first-call session player, and he worked with a wide variety of A-list players, including Aretha Franklin, B.B. King, Joe Cocker, Dr. John, and with Natalie Cole on her "Unforgettable" album.

He orchestrated music for scores of films and played and appeared in the Robert Altman film "Kansas City." He later did a national tour with the band from that 1996 film for Verve records.

Newman himself became a character in "Ray," the 2004 biopic of Charles' life that starred Jamie Foxx. And while Newman thought that Foxx did a remarkable job capturing the life of a legend, he wasn't pleased with the way he was portrayed in the Taylor Hackford film.

In the movie, the character called Fathead is depicted as a brash young musician who turned Charles on to hard drugs. The soft-spoken Newman had said Charles had been using drugs for several years before they met. "Drug use was prevalent at the time, even fashionable," Newman told the Columbia Daily Tribune. The movie, he added, "didn't really say that."

He is survived by his wife, four sons, seven grandchildren and three great-grandchildren.
Funeral services are pending.
Posted by Arnaldo DeSouteiro at 9:14 AM