CD of the Month - "Dave Brubeck: Live at the Monterey Jazz Festival" 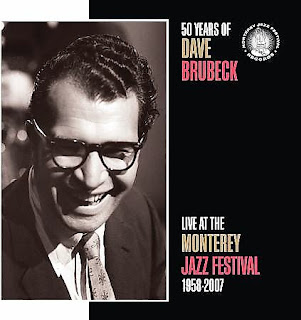 This CD, released in 2008, brings together 50 years of live appearances from Dave Brubeck and his groups at the Monterey Jazz Festival. If the mere fact that Brubeck has been playing Monterey from 1958 straight through to 2007 wasn't impressive enough, the consistency of his dazzling musicianship should do the trick. Naturally, Brubeck plays with a variety of musicians over the years, but each of his ensembles glow with the precision, swing, and that particular mix of classical and improvisatory elements for which the artist is known.

Whether on standards ("Someday My Prince Will Come"), post-bop work-outs ("Jumping Bean"), striking originals ("Tritonis," "Two Part Contention," and "Sermon on the Mount") or signature tunes ("Take Five"), Brubeck comes on strong, impressing with his range, vitality, and endurance. All tracks previously unreleased, except "Sleep" (2006) and "Someday My Prince Will Come" (1962).