"The Monday Night Legacy" of the Vanguard Jazz Orchestra 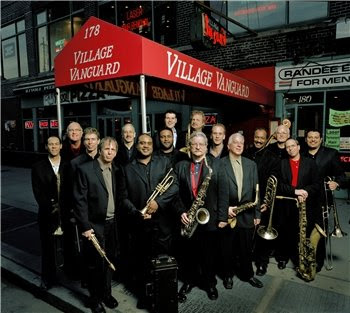 THE VANGUARD JAZZ ORCHESTRA
In collaboration with PLANET ARTS, SIXTEEN AS ONE MUSIC INC. and THE VILLAGE VANGUARD PRESENT:
"THE MONDAY NIGHT LEGACY
PAST – PRESENT – FUTURE"

From February 2 though 9, 2009, the Vanguard Jazz Orchestra (VJO) will present a special week-long retrospective at the Village Vanguard in New York City. The week will trace the orchestra’s development from 1965 to the present day and highlight the three major incarnations of the ensemble (Thad Jones/Mel Lewis, Mel Lewis/Bob Brookmeyer and VJO/Jim McNeely). The eight night retrospective will illustrate how the Monday Night Orchestra shaped a new generation of large ensemble music practitioners and defined the post swing, post bop big band.

A special focus of the week will be the kickoff of the Bob Brookmeyer performance/recording project. The music of Mr. Brookmeyer, a founding member of the Thad Jones/Mel Lewis Jazz Orchestra, music director of the Mel Lewis Jazz Orchestra and a featured composer/arranger for all of the VJO’s performances, will be showcased throughout the week as the orchestra embarks on a year long project that will culminate in a recording of new compositions and arrangements from Maestro Brookmeyer.
**************
THE MONDAY NIGHT LEGACY WEEK
Monday and Tuesday, February 2 and 3
The Early Years

It all started with a handful of compositions by Thad Jones but quickly grew into a composers collective generating music from founding members Bob Brookmeyer, Jerry Dodgion, Garnett Brown, Tom McIntosh and Jerome Richardson.
**********
Wednesday and Thursday, February 4 and 5
The Middle Years

While the music of Thad Jones continued to drive the ensemble, the contributions of Bob Brookmeyer broke new ground in jazz orchestra music and moved the band in new directions. Brookmeyer became music director after Thad left for Denmark and created some of the most innovative music of the day including tour de force solo vehicles for likes of Joe Lovano, Dick Oatts and Tom Harell,
**********
Friday and Saturday, February 6 and 7
The Later Years

Thad’s music remains a constant to this day but both he and Mel encouraged other composers to write for the band. This philosophy kept the musical identity evolving and the spirit of the orchestra alive while avoiding the pitfalls of becoming a repertory band. Selections from a large list of contributors will frame the weekend sets.
********
Sunday and Monday, February 8 and 9
Moving Forward
Jim McNeely is currently the composer in residence for the orchestra. Bob Brookmeyer said it best with his comment about Jim: "Whatever the 'next step' is in music, I firmly believe he will be it. He has all the tools - imagination, technique, dreams, ambition..."

Sunday and Monday will be programmed by Jim and include music from the book that has had an impact on his work as well as selections from the GRAMMY nominated recordings Lickety Split and Up From The Skies.
**********
RESERVATIONS:
http://www.villagevanguard.com/
(212) 255 4037
178 Seventh Avenue South
New York, NY 10014
Posted by Arnaldo DeSouteiro at 6:57 PM