CD of the Day - "David Fathead Newman: Back To Basics" 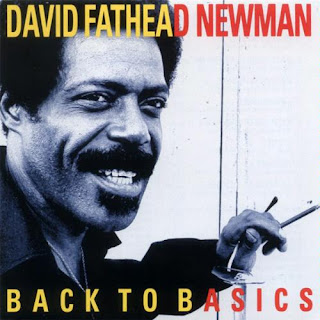 Compilation produced by Orrin Keepnews, who had co-produced the original recordings with Bill Fischer, and decided to remix everything deleting all the orchestral overdubs. Thus the title "Back to Basics". Fantasy Records president Ralph Kaffel approved the unusual idea. To work on the simplified new mix, Orrin requested David Luke, an engineer totally unfamiliar with the original albums. "He was informed of the circumstances, but barred from hearing the overdub tracks," wrote Keepnews in the liner notes. "Instead, we fashioned a new basic mix for the saxophonist and his world-class rhythm support. I really dig the results."

The first four selections were recorded in November, 1977, and released on "Concrete Jungle" (Prestige LP 10104). Other selections were recorded in May, 1977 and released on "Keep The Dream Alive" (Prestige LP 10106) - except "Destiny" which is a previously unreleased alternate take recorded for that album. Also includes the bossa ballad "Clouds" (Nuvens), which Fathead learned from Cannonball Adderley's album with Sergio Mendes & The Bossa Rio Sextet produced by Keepnews, two Stevie Wonder songs ("Knocks Me Off My Feet" and "I Am Singing"), McCoy Tyner's "Blues for Ball", Buddy Johnson's "Save Your Love For Me" and even Bob Marley's "Concrete Jungle", besides Newman's own "Keep The Dream Alive," a jazz-disco hit on its original orchestral mix.
Posted by Arnaldo DeSouteiro at 9:11 AM