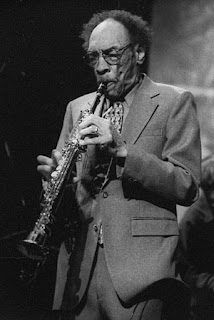 He had not expected to blossom like he did at this age, 83 year old Sam Rivers said at a concert at New York's Miller Theater, as Nate Chinen reports ( New York Times ). On stage he met with Dave Holland and Barry Altschul, two musicians with whom he had worked together in the 70s. On each of the instruments he played he showed a different approach: "on tenor saxophone he had a burred and slightly bleary tone; on soprano he sounded silvery and precise; during his forays on flute he balanced dartlike flurries against a multiphonic humming; and his brief piano interlude was disarmingly sumptuous, with a sweeping romanticism that felt transplanted from another show". Holland and Altschul played with immense presence as well, even though at times "there was a mild disconnect between Mr. Rivers and the other musicians". But that is understandable, writes Chinen, as they had not performed together for such a long time.
Posted by Arnaldo DeSouteiro at 6:10 PM