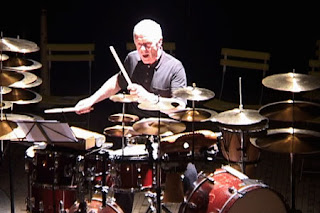 The drummer Pierre Favre performs with a drummers' ensemble at the moment which plays a repertoire of up to 70 percent composed music, as he tells Lukas Baumann ( Schaffhauser Nachrichten ). He deliberately works without melodic percussion instruments such as the marimba or the xylophone. Each of the eight drummers brings his own instrument, and each of them phrases differently. Even though he works more with composition these days, he sees himself mainly as a jazz musician. He constantly learns something new, from African or Indian music or from classical music. He practices every day from 5am, in several concentrated, one-hour long practice units. In its structure his playing is very traditional, based upon what came before ... yes, also upon Baby Dodds.
Posted by Arnaldo DeSouteiro at 4:37 PM