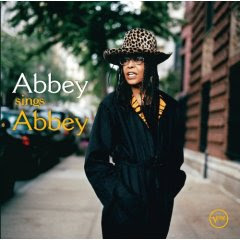 NYT journalist Nate Chinen meets the 76 year old singer Abbey Lincoln who is back home after heart surgery and a lengthy hospital stay ( New York Times ). She is one of the few jazz singers who always wrote her own songs, as is the case with her newest album "Abbey Sings Abbey" to be out by Tuesday. She played in the film "The Girl Can't Help It" and in the early 60s burnt the dress which she (and before her Marilyn Monroe) had worn in the movie. In the 60s she was politically active together with Max Roach; and only in the 70s she started to seriously work as a composer.

In her new album she refers to the jazz as well as to the folk tradition, following the line of singer-songwriters such as Bob Dylan. For the first time she works together with sounds from steel guitars, accordions and other American Roots instruments. Singers such as Kendra Shank or Cassandra Wilson have called Lincoln an important influence. After her illness Lincoln thinks about what might come after her, and plans to bequeath her apartment to a community center. But her greatest legacy, writes Chinen, is her music which she has sung and plans to sing in the near future.