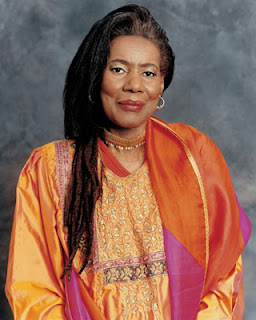 A long memorial ceremony for Alice Coltrane who died in January took place at the New York cathedral St. John the Divine on Thursday, as Nate Chinen reports for the New York Times. She had been the "mother of many", said her son, the saxophonist Ravi Coltrane. Musical memories came from musicians such as Rashied Ali, Charlie Haden, Cecil McBee, Geri Allen, Reggie Workman and Jack DeJohnette, who played pieces from the repertoire of the pianist and harpist, "Blue Nile" for instance or "Jagadishwar". Haden recalled his collaboration with Coltrane in his speech, other speakers talked about her spiritual journey.
Posted by Arnaldo DeSouteiro at 5:40 PM