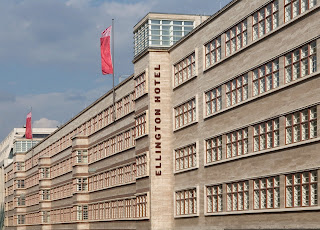 There is a new hotel in Berlin which opened in March 2007. It is in a beautiful historic block close to the KaDeWe department store and the Gedächtniskirche and it's called the "Ellington Hotel". Its name does refer the Duke, even though the music on the hotel's website ( http://www.ellington-hotel.com/) is more of an ambient kind of smooth background fusion.

The building once was home to the legendary club "Badewanne" which in the late 1940s started as a place for contemporary "Kabarett" (political satirical shows) and avantgarde dance and music productions. In the 50s it became a jazz club where Louis Armstrong, Ella Fitzgerald, Duke Ellington and other visiting jazz stars hung out with the local folks after a regular concert. Earlier the building contained the "Femina", an important venue for dance and jazz orchestras from 1929 and into the late 1930s.
In the 70s and 80s the block was home to another bar and dance place called the "Dschungel" (that's "jungle", but not meant as a reference to Ellington's jungle recordings) where David Bowie, Lou Reed, Romy Haag used to hang out (yours truly, as well, by the way). The Ellington Hotel has a restaurant called "Duke". The interior of the restaurant does not remind you a bit of Ellington (nor does the menu). The lobby features a poster of Ellington (and McKinney's Cotton Pickers) performing at Detroit's Graystone Ballroom and hotel clerks dressed in pseudo 1920s uniforms. The rooms look rather clinical from the pictures published on the hotel's website. And that the hotel houses "the world's largest Elvis exhibition" apart from Graceland at the moment ain't quite got that swing either...
Posted by Arnaldo DeSouteiro at 2:40 PM