Fats Domino is back on the block! 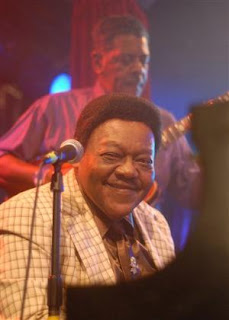 Last Saturday the pianist and singer Fats Domino gave his first public performance since 2004, as Stacey Plaisance reports ( San Francisco Chronicle ). During Hurricane Katrina his house was destroyed; Domino himself had to be rescued by boat. The band played about a dozen of his hits at the club Tipitina's in New Orleans which also plans a tribute album involving Elton John, Tom Petty, Bonnie Raitt, Lenny Kravitz, Willie Nelson, B.B. King, Paul McCartney and others. The proceeds is to help buy instruments for New Orleans' public schools and help artists recover from the hurricane. About 25 percent of the proceeds will go toward restoring Domino's house.
Posted by Arnaldo DeSouteiro at 5:25 PM