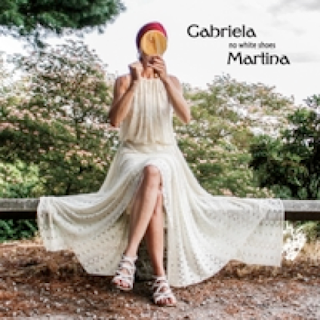 Great art often arises out of transition and displacement. For the Swiss-born, Boston/New York-based vocalist/composer Gabriela Martina creating a body of original music in her new setting has meant grappling with big questions and forging a singular sound out of a disparate array of influences, from jazz, funk and pop to gospel and Alpine roots music (as a child Martina yodeled in her family's Swiss singing group).

Martina's arresting and utterly personal debut album "No White Shoes" introduces a rapidly evolving artist steeped in jazz but unfettered by the music's prevailing conventions.  The CD is available as a download only at: http://www.cdbaby.com/cd/gabrielamartina3 or at amazon.com.

Martina has cultivated a powerfully evocative sound with her crystalline voice, honed through concerts throughout the world. She's performed with Meshell Ndegeocello, Jack DeJohnette, and Angelique Kidjo, and recorded with veteran drummer J.R. Robinson. In addition, she performed at the 2009 Montreux Jazz Festival in guitarist Lee Ritenour's band as a semi-finalist in the Shure Voice Competition.

Though "No White Shoes" includes a couple of brilliantly interpreted jazz standards, Martina focuses on improvisation-laced originals that combine singer/songwriter introspection with sophisticated harmonies. Informed and inspired by the quietly tumultuous process of acculturation, she uses music as a vehicle to wrestle with her protean identity.

The album opens with "Narcissus," a song that elaborates on the symbolism of the album's striking cover art, with Martina's face obscured by a mirror. More than a source of expression, Martina's music is a vehicle for hard-won self-knowledge.

Sassy, mesmerizing, and tinged with funk, the celebratory "No White Shoes" speaks to Martina's eagerness to break free from mainstream conventions. As it builds to an ecstatic climax, it's easy to see why this plea and declaration became the album's centerpiece. Conceived as a rejection of Switzerland's cozy cultural cocoon, the song speaks to Martina's insistence on hewing to her own path.

"In Switzerland everything is so comfortable and so beautiful on the surface," Martina says. "It's a song about breaking boundaries and questioning traditions and musical conventions. It's a positive message. It stands for new ways, for something other than the mainstream, for being your own self, and walking your own way."

More than a singer/songwriter, Martina is also a savvy bandleader who has attracted a core band featuring some of Boston's finest players. A working ensemble for about four years, her band is built upon the supple rhythmic support of drummer Alex Bailey, a player with the chops to join heavyweights like Oscar Peterson and David "Fuze" Fiuczynski. He forms a potent rhythm section tandem with another rising young Boston star and recent Berklee grad Kyle Miles on acoustic and electric bass, a highly versatile player who has accompanied Angelique Kidjo, Patrice Rushen, Greg Osby, and Roy Hargrove, among many others.

Born in Lucerne, Switzerland, Martina was no stranger to urban settings before moving to Boston. But she spent her childhood in a bucolic idyll, amidst a family dairy farm surrounded by orchards. The third of four children in a tight-knit working class family, she grew up in a highly musical environment. At the age of five, she discovered her passion for singing while yodeling with her family's traditional Swiss group.

Before coming to Berklee College of Music in 2008, Martina studied at the Vocaltech Music School in London and the Jazzschool in Lucerne.  While there, she became a ubiquitous presence on the Swiss scene, performing with an array of bands including Talking Loud, Soulvirus, the pop-rock group PinkBliss, the electro/urban trio Aromat, an a cappella duo Not2help, and her own jazz duo with pianist Luzia von Wyl.

In 2010 Martina released a critically hailed EP Curiosity, which included her original song "Ain't Nobody", a finalist in the ASCAP Foundation Young Jazz Composer Awards 2012. Performing around US East Coast and beyond, she has honed her original repertoire with her band at clubs around the region. She's also the co-founder of IMS, an ongoing, bi-weekly free improvisation concert series which began in 2013 in Cambridge, MA.

Her album "No White Shoes" represents a major step in the singer's sojourn as a 21st century musician exploring an array of influences, styles and issues, a journey that's intoxicating and utterly unpredictable.