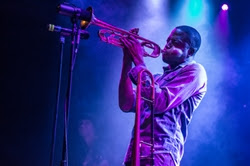 Rob Duguay talks to the trombonist Troy Andrews aka Trombone Shorty about his early start as a bandleader (at the age of six), leading the ensemble not from the trombone but the tuba, about his past as well as wished-for collaboration with musicians from different genres, about a children's book he published recently, about performing at the White House and meeting Barack Obama, as well as about being from New Orleans being an advantage when it comes to mixing influences ( Vanyaland). --- Nathan Rizzo looks at the jazz history of Portland, Oregon, and talks to the drummer Mel Brown, the guitarist Dan Balmer, the bassist Damian Erskine, the pianist George Colligan, the alto saxophonist Christopher Brown, the singer-songwriter Coco Columbia, the drummers Barra Brown and Jose Medeles, the saxophonist Reed Wallsmith and others about the changing scene and current trends influencing the city's music ( Vortex).

Jessie Schiewe talks to the pianist Robert Glasper about the hipness factor of jazz, about a new but more open interest in the genre, and about the fact that one does not necessarily have to end up playing in one genre just because that's where one started ( SF Weekly). --- Adam McCulloch lists ten major European jazz clubs of different sizes in Lisbon, Kraków, Berlin, Copenhagen, Brighton, Vienna, Prague, Paris, Cologne, and Madrid, describing the atmosphere and their connection to the local scene and providing photos, videos and more information about their program ( The Guardian).

Florian Bissig reflects about the guitarist Bireli Lagrène's career from his Montreux festival debut in 1981 up to date with excursions into the fusion field and a recent return to the roots of what Bissig calls "Gipsy" projects and his longtime idol Django Reinhardt ( Neue Zürcher Zeitung ). --- Jochen Brünner talks to the German trumpeter Uli Beckerhoff about the jazz scene when he got into jazz and how it has changed over the years, about the team spirit in a jazz ensemble, and about the rich cultural infrastructure in Germany ( Weser-Kurier).

Frances Mulraney reports about and links to a new video commercial ("advert") for Guinness beer focusing on the impresario John Hammond's role in desegregating the music industry in the late 1930s ( Irish Central). --- Kevin Joy talks to the saxophonist Charles Lloyd about his personal approach to writing and performance, about his current band, about the role of jazz in the 21st century, about his greatest influences having been (a) the universe and (b) Phineas Newborn, and about his advice to young musicians being they should make music because they love it ( The Columbus Dispatch).

Saul Sugarman talks to the Israeli trumpeter Itamar Borochov about the "global" influences on his music, about his start in jazz with bebop, about at one point having become aware of the fact that he couldn't remember the last time he had listened through an entire record after which he decided to listen only to vinyl recordings instead of digital music, and about New York, where he lives since nine years, being home but seeing himself returning to Israel one day ( JWeekly). --- Nate Chinen talks to the bassist Michael League about the unique appeal of the music by the band Snarky Puppy which he co-founded in 2006, about the difficulties to place the band into a specific genre, yet feeling that it would fit better into the jazz than the jam band category, as well as about their 11th album, "Culcha Vulcha", to be out in June ( New York Times).

In an extensive article, Mark Stryker reflects upon the career of trumpeter / arranger / composer / bandleader Thad Jones who had co-founded the Thad Jones / Mel Lewis Orchestra 50 years ago which still performs at New York's Village Vanguard today, now under the name Vanguard Jazz Orchestra ( Detroit Free Press). --- Jairos Saunyama reflects about jazz history in Zimbabwe, Africa, pointing out that musicians there play a fusion of styles like sungura, Congo rhumba, benga, mbaqanga and others with jazz, finding that jazz may be unpopular because it is "like abstract art", quoting the argument that there really are "no jazz bands" in the country, and looking back at South African and Zimbabwean jazz sounds from the 1940s till today ( The Standard).

Michael Briers reports about a new trailer for Don Cheadle's Miles Davis biopic ( We Got This Covered). --- Steve Wildsmith talks to the singer Rene Marie ( The Daily Times). --- Jan Wiele ( Frankfurter Allgemeine Zeitung ) and Tilman Krause ( Die Welt) see the exhibition about the influence of jazz on 20th century art at Kunstmuseum Stuttgart. --- The Canadian trumpeter Al Muirhead has been nominated for a Juno award ( CBC). --- Craig Byrd talks to the pianist Jason Moran ( Los Angeles Magazine). --- Becca Martin-Brown talks to the singer Genine LaTrice Perez ( Northwest Arkansas Democrat-Gazette). --- Elizabeth Stockman talks to members of the Preservation Hall Jazz Band about their recent trip to Cuba ( PRI). --- Andrian Kreye hears the new album by trumpeter Avishai Cohen and asks about the reasons for his musical decisions ( Süddeutsche Zeitung). --- Matthias Einwag reports about the drummer Famoudou Don Moye who contacted the city archive of Staffelstein, Germany, to learn more about the mysterious death of his father who was stationed there in 1946 ( Fränkischer Tag [only accessible for subscribers]). --- David Matthews reports that Bob Koester seems to have found a buyer for the records at his Chicago-based Jazz Record Mart ( DNA Info). --- Marc Myers talks to the saxophonist and arranger Bob Freedman about the legendary pianist Dick Twardzik whom Freedman had known since the late 1940s ( Jazzwax).

Last Week at the Jazzinstitut
Last Friday the new quartet UNIT by the French-German saxophonist Eric Plandé played at the Jazzinstitut's concert space, featuring Bob Degen (p), Jürgen Wuchner (b) and Janusz Stefanski (d).
We read ... Alfred Green's book "Rhythm Is My Beat. Jazz Guitar Great Freddie Green and the Count Basie Sound" as well as Chris Smith's book "The View From the Back of the Band. The Life and Music of Mel Lewis". The review of these and other books can be found on the book review page of our website.

Jazzinstitut Darmstadt is a municipal cultural institute of the city of Darmstadt, Germany.
Posted by Arnaldo DeSouteiro at 3:13 AM