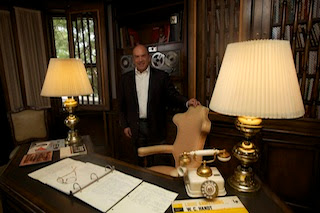 David Reese joined the Louis Armstrong House Museum with an impressive resume of historic preservation experience.  With a Masters in Historic Architecture from the University of Virginia, David had devoted his entire career to historic sites and historic preservation.  Michael Cogswell, Executive Director, recalls that "During weekends and vacations, David would typically visit other historic houses.  He truly loved the Louis Armstrong House and brought an enviable level of professionalism to the conservation and preservation of our site."  When asked about joining the Louis Armstrong House Museum Mr. Reese commented "I am honored to be appointed Curator of the historic home of one of America's greatest musicians, and thrilled to have a new role in the cultural life of New York City."

David was born in upper Westchester County, where he grew up in a historic home.  He entered the University of Virginia in 1970, and earned a BA in English, MA in English, and a MA in Historic Architecture.  His love of historic sites was enhanced by the grounds of the University, designed by Thomas Jefferson, and while an undergraduate he became a tour guide for Jefferson's Rotunda.  He was a member of the prestigious Raven Society.

David's career highlights included serving as Museum Director of Mount Vernon Hotel Museum & Garden from 1981-1987, Curator of Gracie Mansion and Chief Officer of the Gracie Mansion Conservancy from 1987-2002 under Mayors Koch, Dinkins, Giuliani and Bloomberg and Resident Director of Gunston Hall, the historic home of George Mason from 2003-2012.  Mr. Reese authored “American Beaux Arts, 1870-1926" from The Elements of Style, a Practical Encyclopedia of Interior Architectural Detail published by Simon & Schuster in New York and by Mitchell Beazley Ltd. in London.  He also authored "Gracie Mansion" and "Inwood Park”, entries in City Streets published by the Little Bookroom in New York.

On Mr. Reese's passing, Donna Hanover first lady of the City of New York from 1994-2001 noted, "My dear friend David Reese was a fantastic Curator at Gracie Mansion during four Administrations, starting with Mayor Ed Koch.  He was incredibly knowledgeable, gracious, and dedicated to making that lovely historic house a warm home for me and my children as well as a welcoming place for thousands of visitors from around the world."

He is survived by his mother, Virginia Reese, sister Taffy Brenner, and brother William G. Reese III.
Posted by Arnaldo DeSouteiro at 10:28 PM