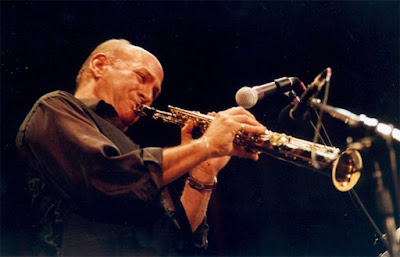 Alec Wilkinson talks to the pianist Vijay Iyer about his own perception of his piano playing, about his residency at New York's Metropolitan Museum of Art, about how he got into jazz as a teenager, about the lineage of pianists he sees himself in, about what happens in his trio, about his research (and subsequent PhD thesis) about music perception, about his awareness for his Indian roots, about the micro-decisions he has to make while improvising, about the different possibilities at the piano, about his upcoming residency at the Met Breuer building, and about teaching at Harvard University ( The New Yorker). --- Meridee Duddleston talks to the singer René Marie about starting her career only in her early 40s, as well as about the need to strike an emotional chord with her listeners ( WRTI).

Cormac Larkin talks to the saxophonist David Liebman about the magic of playing jazz, about the epiphany of hearing John Coltrane play at Birdland, about the New York jazz scene of the late 1960s and 1970s when he lived in a loft on West 19th Street in the same building as bassist Dave Holland and about teaching being an art form all by itself ( Irish Times). --- Devon McReynolds reports about Sebastian's Cotton Club, a 1920s/1930s Culver City show and live music venue which regularly featured bands such as Louis Armstrong's, Fats Waller's or, after it reopened as Casa Manana in the late 1930s, Duke Ellington's before burning down in 1950 ( LAist). McReynolds shares historic photos both of the venue and some of the artists performing there.

Ulrich Kriest talks to the Austrian guitarist Wolfgang Muthspiel about the lack of working bands in jazz, about the chance to perform with his new project with Brad Mehldau, Ambrose Akinmusire, Larry Grenadier and Brian Blade in a live setting before recording it, as well as about the jazz scene being a community constantly looking for new adventures and conversations ( Stuttgarter Zeitung). --- Willard Jenkins talks to the pianist Jason Moran and his wife, the singer and Alicia Hall Moran, about their break-away from Blue Note Records and about their own new label, Yes Records, on which they want to build an archive documenting their work, as well about their newest album "Heavy Blue" ( The Independent Ear).

Hans Hielscher talks to the Brazilian singer Ed Motta in an article about the importance of entertainment and showmanship in jazz in which Hielscher also refers to the Swedish trombonist Nils Landgren and to a reissue of Les McCann live recordings ( Spiegel Online). --- Rabbi Yoshi Zweiback quotes a Jerusalem colleague who compares (Jewish) prayer to jazz and then gives examples from his own praying experience and compares jazz to Judaism in general ( Jewish Journal).

Nate Chinen talks to Maria Schneider, George Klabin, Darcy James Argue, Douglas Purviance, and John Mosca about the 50-year career of the Vanguard Jazz Orchestra which as Thad Jones / Mel Lewis Big Band started playing its weekly Monday night gigs at the Village Vanguard in New York on 7 February 1966 ( New York Times). --- Michael Rüsenberg reflects about the future of the radio (and especially of jazz on the radio) in the age of the internet, by looking back at his own experiences with the media, and by suggesting that a "serious discourse" should not only be possible on-air but might even be more independent than the discourse happening in printed media ( Michael Rüsenberg).

Howard Reich reports about the Jazz Record Mart, long billed as "The World's Largest Jazz and Blues Record Store" in Chicago, which is up for sale, and talks to the 83-year-old founder and owner Bob Koester who says, the business is not too bad but the rent is killing them ( Chicago Tribune). --- Christoph Merki explains why he thinks that the saxophonist and composer John Zorn is an overrated artist, at least from today's perspective ( Der Bund).

The Jazzwoche Burghausen festival in Germany made some headlines as Bayerischer Rundfunk discussed its continued TV coverage of the event; a representative of the radio station assured us that the radio coverage was never questioned and will continue as before. --- Ingrid Hoberg previews the Jazzwerkstatt Peitz to be held in June ( Lausitzer Rundschau). --- Cesarea Garada talks to the pianist and composer Cathleen Pineda ( The Bakersfield Californian ) --- Ben Ratliff hears the saxophonist Charles Lloyd at the Appel Room at Jazz at Lincoln Center ( New York Times).

The pianist Joachim Kühn performed in Darmstadt last Thursday – no concert of or in connection with the Jazzinstitut, but as Kühn is a good friend of the institute and as he remains to be one of the most individual artists on the German jazz scene it was a must-visit at Stadtkirche (city church) where he played a program of originals, Ornette Coleman numbers and other tunes. Michael Bossong reports for our local newspaper ( Darmstädter Echo).

The city of Darmstadt published its Stadtlexikon Darmstadt (City Encyclopedia Darmstadt) in 2006, a compendium of articles about the history of Darmstadt, containing information about people, political and cultural developments and much more. The book has now been updated and published online ( Stadtlexikon Darmstadt ). Doris Schröder and Wolfram Knauer of the Jazzinstitut have both been authors for the book, Doris about the Jagdhof Bessungen, the history of the area we work in, as well as about the Forstmeisterhaus, a historic building not far from the Jazzinstitut, and Wolfram about Jazz in Darmstadt, a look at activities in our city related to jazz and/or African-American music from the 19th century up to date.
Posted by Arnaldo DeSouteiro at 8:59 PM