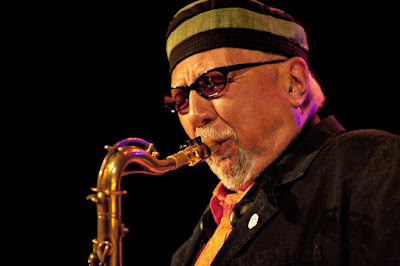 Stuart Derdeyn talks to the saxophonist Charles Lloyd (pictured above) about his current quartet, about changes in popular music taste and its openness to other genres, about hearing the blues in Greek and Indian music, as well as about a recent project The Marvels with guitarists Bill Frisell and Greg Leisz ( The Province). --- Lou Fancher talks to the pianist Larry Vuckovich about having studied with Vince Guaraldi after he came to the USA from his home country Yugoslavia in the early 1950s, about Guaraldi's teaching methods and about still not knowing why Guaraldi accepted him as a student while he turned down everybody else ( Contra Costa Times).

Steve Elman writes an extensive review of German saxophonist Norbert Stein's latest album "Das Karusell" in which he musically approaches poems by Rainer Maria Rilke, comparing the result to David Bowie's last album "Blackstar" which is just as extensively reviewed ( The Arts Fuse). --- David Kerns talks to the bassist Jeff Denson about the Northern California's jazz scene, about his work teaching at the California Jazz Conservatory, as well as about his current quartet ( Napa Valley Register).

Guenter Huesmann looks back at the jazz developments in Germany in 2015, focusing on the study about working and living conditions of German musicians undertaken (among others) by the Jazzinstitut Darmstadt, on celebrations of bassist Eberhard Weber, on the singer Erik Leithäuser, the pianist Sebastian Sternal, the saxophonist Roger Hanschel, the pianist Michael Wollny and the drummer Christian Lillinger, on new funding ideas in the state of Baden-Württemberg, on the lively jazz scenes of Berlin and Cologne, and about a reawakening of big bands in Germany ( Goethe-Institut). --- Christina Carrega-Woodby reports about the start of a lawsuit against the contractor who had stolen nearly half a million dollars from pianist Cecil Taylor, robbing him of the monetary part of the Kyoto Prize which Taylor was awarded in 2013 ( New York Daily News).

Uwe Petersen talks to the Hungarian-German clarinetist Lajos Dudas about his idol Benny Goodman, about his career between swinging and free jazz, about classical influences from Bach to Bartók, about some of the highlights of his career, and about how much he enjoys performing even at the age of 75 ( Südkurier). --- Randy Sandke looks at Local 802, New York's musicians' union, which from early on had been one of the few unions without a color line, and chronicles the union's handling of black musicians' and bands' affairs in the 1930s ( Allegro).

Nils Sager talks to the Swiss drummer Julian Sartorius about his fascination with everyday "instruments" like grass, chair lifts or pocket vibrators, about the listener not having to understand his music as long as he is curious, about the fact that traveling as a musician does not really help to understand other cultures, about different audiences in different regions of the world, about the Colin Vallon Trio he plays with since three years, as well as about his love for deep, dark sounds ( Jungfrau Zeitung). --- Sol Hurwitz learns how French-American singer Cyrille Aimée usually spends her Sundays, rising early, drinking cactus juice, hanging around a nearby park, visiting a favorite flea market, meeting friends, watching a movie or reading a book ( New York Times).

J.D. Swerzenski talks to the saxophonist Branford Marsalis about his attraction to classical music, about never really having looked for "freedom" so much in music, about the influence of his classical studies on his jazz playing, about hip-hop artist Jay-Z, as well as about the musical risks taken on stage ( San Antonio Current). --- In a story with historic as well as current photos, Della Hasselle reports about the St. John Parish Woodlawn plantation in Louisiana which is up for sale for $550,000, recounts the plantation's history which started in 1793, slavery time and a slave revolt in 1811, and remembers the trombonist Joseph Kid Ory who was born in a house behind the plantation on Christmas Day 1886 ( New Orleans Advocate).

We learned of the passing of the German guitarist Hans Reffert at the age of 69 ( Jazz Pages), the curator of the Louis Armstrong House Museum, David L. Reese, as well as the pianist Moe Wechsler at the age of 95.

Angelika Niescier (sax), Stefano Senni (bass) and Simone Zanchini (accordion) performed at the Jazzinstitut Darmstadt last Friday, in an intense concert full of surprising turns, breakneck passages and memories of folklore idioms, playing to a full house mesmerized by the sheer musical energy of the three. In between, Niescier found time for an onstage "JazzTalk" interview about this trio, about virtuosity as a musical vocabulary not much different from the use of harmonic, rhythmic or melodic parameters, about the need to stay alert at all times in order to make the music work, about her experiences giving a workshop to Egyptian musicians last November and about the humbling experience of how music actually still has a very political meaning of personal freedom in many parts of this world.

On Tuesday, 8 March, Wolfram Knauer will present a talk at Galerie Netuschil in Darmstadt (Schleiermacherstraße 8, 7pm) about "Stele – Torso – Column – Jazz. A Look at the Space Aspects of Music". During the entertaining evening he will look at "sculptural" aspects of music, asking how music deals with the space it re-sounds in. Especially jazz lives in the space of its venues, makes use of their specific acoustic, their atmosphere. Using surprising music and film examples, Knauer explains how musicians have always used aspects of space in their music and how you can walk around a jazz solo much like walking around a sculpture. The talk is part of a series of conversations about the exhibition "Stele – Torso – Column", to be seen at the Galerie Netuschil until 26 March ( Galerie Netuschil; Jazzinstitut).
Posted by Arnaldo DeSouteiro at 10:28 PM