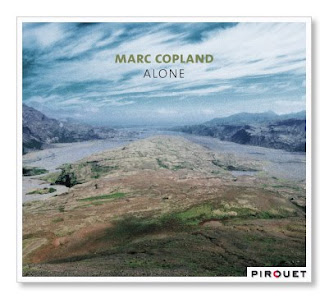 I love Herbie Hancock. For me, he's one of the best keyboardists in jazz history. We've been friends for almost four decades, since the mid-70s. But, when I got his tribute album to Joni Mitchell, "River - The Joni Mitchell Letters", I became very disappointed. Although it got even a Grammy, I think it's one of the less interesting albums Herbie ever made. Frankly speaking, it's the most boring album Herbie did on his entire (and brilliant) recording career.

I love Marc Copland. For me, he's one of the best pianists in jazz history, an underrated artist (at least in the USA market, since he records prolifically in Europe) who's in the same creative level of Keith Jarrett and Ahmad Jamal, all with particular and peculiar musical styles. We've been friends for twenty years, since we first met in NY in 1989. But when I got his newest album, "Alone," and read both the tracklist and the press-release, and saw it included three Joni Mitchell's tunes, I felt scared to feel the same disappointement generated by Hancock's "River." I said to myself: here comes River's vol. 2...

No way. My intuition was completely wrong. Not only the album is another masterpiece on Marc's career (only Jarrett and Jamal have been also able to release so many successive wondrous albums in the last decades), as it also includes the best jazz takes on Joni Mitchell's tunes ever.

But there's much more. Copland's reading of "Soul Eyes," the opening track, alone would be enough to place him as the best pianist of the year. His 7-minute dive into Mal Waldron's gorgeously contemplative ballad is a musical lesson that seems to come from another dimension, not from an human being. I knew Mal and, for coincidence, produced the first ever recording of "Soul Eyes" with lyrics, when I was 17 yo, for Yana Purim's debut RCA album. And of course I'm very familiar with several other recordings, including some of Waldron's own versions. However, nothing compares to Copland's take on the song. It's "everything": subtle, delicate, complex, emotional deep... That's life translated into sounds. Period.

Born in Philadelphia in 1948, he began his professional career in the 60s as a saxophonist. Since the late 80s he has more and more made a name as a pianist with a totally unique aesthetic, recording an impressive body of work. Solo sessions, trio recordings, stunning collaborations with John Abercrombie, Randy Brecker, Greg Osby, Bill Carrothers, Kenny Wheeler, Tim Hagans, Jason Seizer, Gary Peacock. His enigmatically suspended harmonies create textural nuances which have become an unmistakeable trademark.

So... after having given repeated listenings (no less than six) to "Soul Eyes," I got the courage to move to track 2, Joni Mitchell's "I Don't Know Where I Stand." Friends, I broke into tears. Copland's expressiveness and "introverted eloquence", is beyond words, he transformed the song into a musical poem of the highest caliber. Only a genius could do this.

"Alone," Marc's solo adventure, comes out on the Munich-based Pirouet label after this pianist's extraordinary "New York Trio Recordings" series of three CDs with different sidemen, the May 2008 release "Another Place" (a quartet session with John Abercrombie, Drew Gress & Billy Hart) and, most recently, the "Insight" duo with Gary Peacock. All being superlative documents of Copland's unique tonal language and expressiveness in a variety of contexts.

And how can someone describes what he does to Axel Stordahl/Paul Weston's "I Should Care"? (btw, the press-release refers to the great Sammy Cahn as "the composer", but Sammy wrote the lyrics only) For over 9 minutes, Marc Copland investigates the tune in a way that nobody - not even another dear friend, Claus Ogerman, in a precious solo piano recording released in 2002 in the 4-CD box set "The Man Behind The Music" - had done. Could you imagine Bela Bartok playing "I Should Care"? That's all I'm able to tell you to give an idea of Marc's ultra-amazing performance, highlighted by the impeccable piano sound captured by engineer/producer Jason Seizer during the recording sessions that took place at Pirouet Studio, in Munich.

I could talk for hours about these tracks, as well as about two other Joni Mitchell songs, Wayne Shorter's "Fall" and Copland's own compositions "Night Whispers" (the sub-title of the "New York Trio Recordings Vol.3" that came out in January 2009 with Drew Gress & Bill Stewart), "Into The Silence" and "Blackboard." I could talk for days about the closing track, Bronislaw Kaper's "Hi Lili Hi Lo", another superb interpretation.

But the last two lines of the Bill Zavatsky poem that appears on the digipak CD liner cover, appropriately say: "Let's listen while we have the chance to music no one's heard." And that's what we hear when we, with Marc Copland, listen "alone" deep within ourselves.

So I prefer to give you the chance to experience by yourselves the Copland magic, which generates a suspenseful atmospheric intensity, throwing the listener back into his own feelings and thoughts. Don't miss this chance to know more about life, including your own.
- Arnaldo DeSouteiro
Posted by Arnaldo DeSouteiro at 4:07 AM

Thanks for a great review.