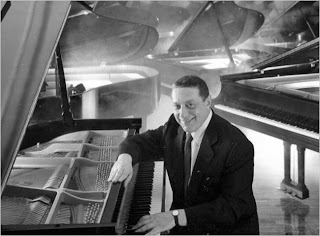 If you would be allowed to evaluate Torrie Zito only based on a single arrangement, please give a listen to his fabulous, lush & ultrasophisticated score written in 1984 to Frank Sinatra's take of Gene DePaul/Sammy Cahn's masterpiece "Teach Me Tonight" for the "L.A. Is My Lady", a controversial label I adore. Btw, the filming of this recording can be watched on the fabulous video "Portrait of an Album," a behind-the-scenes documentary released on LaserDisc by MGM but, unfortunately, not yet reissued on DVD.
The sensational collaboration between Sinatra and Quincy Jones, who produced and conducted the "L.A. Is My Lady" sessions, also included superlative performances by such jazzmen as Lew Soloff, The Brecker Bros., Steve Gadd, Bob James, George Benson, Joe Newman, George Young, Ronnie Cuber, Sam Nestico, Joe Newman, Urbie Green, Lionel Hampton, Frank Foster and many other studio aces. Torrie Zito also co-wrote (with Quincy, David Matthews and Jerry Hey) the arrangement of the delightful pop-oriented title track.

Many years earlier, I had been introduced to Torrie Zito's artistry through my dear friend Richard Templar, who gave me a vinyl copy of Tony Bennett's "Life is Beautiful" album in the late 70s. That LP, arranged & conducted by Torrie (who, btw, was the brother of drummer Ronnie Zito), included Tony's versions of Francis Hime's "Minha" (All Mine) and Milton Nascimento's "Travessia" (Bridges).

Soon after, I became aware of Zito's personal and musical relationship with singer Helen Merrill, with whom he recorded a string of albums as a pianist, arranger and/or producer. Among them, my personal favorite is "Casa Forte," cut in 1980 in NY with Dom Um Romão on drums, George Mraz on bass, Rubens Bassini & Steve Kroon on percussion, Bucky Pizzarelli & Joe Beck on guitar, and Urbie Green on trombone, amongs others.
A very Brazilian-oriented project, "Casa Forte" includes Edu Lobo's wordless title track (which Merrill decided to record after having heard Flora Purim's take on "Stories To Tell"), Sergio Mendes' "So Many Stars," Dori Caymmi's "O Cantador" (Like A Lover, with the English lyrics penned by Marilyn & Alan Bergman), Milton Nascimento's "Vera Cruz", two songs by Antonio Carlos Jobim - "Wave" and "How Insensitive" - plus Michael Frank's tribute to Jobim, "Antonio's Song." It is NOT a coincidence that three songs ("Casa Forte", "Vera Cruz" and "O Cantador" had been recorded on Flora's "Stories To Tell" album for Milestone, one of the most influential vocal jazz albums ever, much to the dismay and despair of the disgusting "Brazilian music press." Argh...