"Journey to the New World", Sharon Isbin’s debut release on the Sony Masterworks label, is a voyage in song from the British Isles to the New World. The virtuoso guitarist, who collaborated in previous projects with Brazilian artists Carlos Barbosa-Lima and Gaudencio Thiago de Mello, is joined this time by folk legend Joan Baez and violinist Mark O’Connor. World premieres: "Joan Baez Suite" by John Duarte for solo guitar and Strings & "Threads Suite" for violin and guitar by O’Connor. 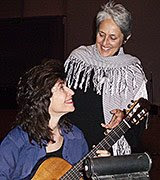 Sharon talks about the new CD:
"Working closely with two wonderfully vibrant, inspiring and warm individuals like Joan Baez and Mark O'Connor is a journey I shall never forget, truly a musical JOURNEY TO THE NEW WORLD - my new debut CD on Sony Masterworks which has just been released.

The journey begins with four English Renaissance lute duets (I perform both parts); followed by The Drunken Sailor and Wild Mountain Thyme composed/arranged for solo guitar by Edward Flower; and Andrew York's mesmerizing Andecy which pays tribute to American and British folk traditions.

To watch a video from my New York concert with Mark, hear radio features and music samples, and order the CD, visit: http://sharonisbin.com

For photos and personal reflections on the music: http://sharonisbin.com/cdnotes.html

On Sunday April 19, 4pm EST, hear a live stream of Bob Sherman's one hour feature on WFUV 90.7 FM. For a link, visit: http://sharonisbin.com/itin.html

And if you're in New York Saturday May 2, please join me at the Kaufman Concert Hall in a program of music from Spain!" 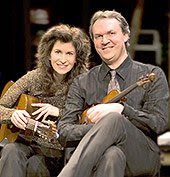 (Sharon & Mark O'Connor)
"The Grammy Award-winner's latest CD is a lovely collection of classical and folk pieces that shows off her virtuoso talents and delicate touch." - FILM SCORE MONTHLY

"Sharon's exquisite playing allowed me to revisit and fall in love with these songs all over again." - JOAN BAEZ

"The beauty and range of Sharon's guitar creates the perfect musical setting and imagery. America and the guitar have become inseparable in their musical manifestations, and Sharon's performance on this recording expresses these connections as richly as you will ever hear." - MARK O'CONNOR

"Sharon's Journey to the New World is an exquisite listening experience that abounds with dynamics, rich tonal colors, mastery, and control - a warm place for the inner ear to dwell and swoon." - STEVE VAI

"Sharon Isbin's superbly lyrical playing endows these folksongs from the British Isles and North America with poetic beauty and enchanting intensity. The singing of Joan Baez is as sweetly evocative as ever." - GRAHAM WADE
Posted by Arnaldo DeSouteiro at 9:06 AM