CD of the Day - "Ramana Vieira: Tears of a Queen" 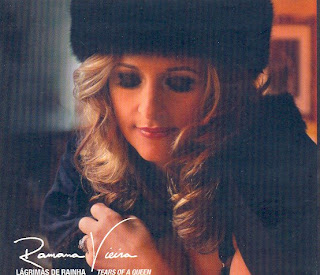 After Mariza, now we have Ramana Vieira as the most creative "fadist" in the current scene, bringing a breath of fresh air to the Portuguese fado tradition, which she updates marvelously. An impassioned singer, with the right dose of drama and expressiviness, as well as adding elements of jazz and Brazilian music in the beautiful arrangements, on "Tears of a Queen" she gives new life to songs made famous by the legendary songstress Amalia Rodrigues, to whom Ramana herself dedicates one of the most haunting tracks of the album.
*********
Ramana Vieira sings with such a wide range of emotions one cannot help but be mesmerized by images of "old world" Portugal that emerge from the depths of her soul. Her extraordinary gift of bringing this 15th century style into modern times is her unique trademark. Often referred to as the "New Voice of Portuguese World Music," this powerful vocalist is making her mark as one of the premier contemporary Fado artists. According to the Portuguese, Fado is a melancholy and often-mournful music similar to the American blues as it tells stories of heartache and disappointment. The essence of the poetry is the quality of "saudade," a word that is difficult to translate as it expresses a myriad of feelings.

In her new release, "Lágrimas De Rainha (Tears Of A Queen)," Ramana has solidified her place as an artist who understands the tradition of Fado singing and continues to creatively construct a path into the future by combining new musical textures and original compositions. Many of the songs on the CD are inspired by Ramana's main influence, Amália Rodrigues, known as the "Rainha do Fado" ("Queen of Fado") and who is attributed to popularizing the Fado worldwide. According to Ramana, "Nobody else is doing what we are doing with Fado. Take the feel and groove of Shakira and the melodic textures of Dulce Pontes and that is how I would describe our music." Even the emotional concept of "Lágrimas De Rainha" paints sonic pictures that support Ramana's desire to invent a fresh Fado sound blooming from the ground of her own family roots. Her grandfather, a famous musician and composer from Madeira Island, Portugal, left her a rich musical legacy that Ramana quickly embraced after experiencing the profundity of the Portuguese culture.

Ramana brings her singing, dancing, and theater studies (from the American Conservatory Theatre in San Francisco) to her performances which include: opening for Grammy nominated fadista Mariza; performing her original song "Unido Para Amar" for the 2006 Winter Olympics video montage; making her international debut with RPT TV Portuguese network; and chosen to sing for the Grammy's 50th Awards special Music Cares benefit to honor Aretha Franklin. Her two prior recordings, "Despi A Alma (I Undressed My Soul)" and "Sem Ti" helped her to gain recognition, win awards, and appear on the cover of "Mundo Portuguese" Magazine.

However, Ramana's truly magical spirit comes alive in "Lágrimas De Rainha (Tears Of A Queen)" which features an outstanding group of musicians, lyricists, and arrangers such as Marcie Brown (cello), Jeffrey Luiz (classic and electric guitars), Stephen La Porta (drums and percussion), Alberto Ramirez (electric bass), and special guests, Helder Carvallheira (Portuguese guitar), Didier Bouvet (guitar), and Golden Reel Award winning film composer and arranger, Robert Randles ("The English Patient," "The Talented Mr. Ripley," and "Amadeus").
Ramana sincerely believes that her progressive and unconventional style of juxtaposing different instrumental layers and nuances will open new doors for Fado music while continuing to maintain the integrity of a time-honored tradition. With her incredible artistry and devotion for Fado music there is no doubt this bright-eyed beauty will accomplish her dream.
Posted by Arnaldo DeSouteiro at 9:04 PM