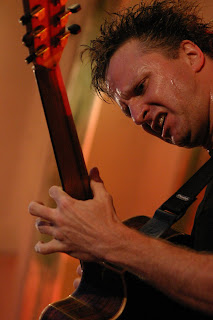 Jeff Aug has successfully set the world record "most concerts performed in different countries in 24 hours" by performing 6 x concerts in 6 x different European countries on the 13th and 14th of March 2009. He started at 7 pm in Vaduz, Liechtenstein on 13.March and ended at 6 pm in Heerlen, Netherlands on March 14, 2009.

According to Jeff, the "Wounded Fingers World Record Tour" was incredibly exhilarating. The audience in Vaduz, Liechtenstein was thin, but enthusiastic. In St. Gallen, Switzerland, the touring party ended up driving to the wrong address (the promoter´s home instead of the club), but then quickly worked out the right address and parked right in front of the venue, jumped out of the van, and Jeff performed show number 2. Show number 3 was in front of a Friday night theater audience in Dornbirn, Austria. The drive to Immenstadt, Germany took the band through the Bregenzerwald (Bregenz Forest) over the Alps through heavy fog.

These first 4 shows were back-to-back from van to stage to van to the next venue, topping off with an incredible concert in front of a massive crowd at the Rainbow in Immenstadt, Germany. The tour crew then set off on a 7.5 hour drive to Belgium through the night. On March 14, Jeff woke up with a stiff arm. The record was set in Verviers, Belgium (5 concerts was needed to set the record), and then signed, sealed, and delivered a hair-raising performance at show number 6 in Heerlen, Netherlands which Jeff performed with a bandaged arm.

Special thanks to Leo & Claudia at Camaleon in Vaduz (FL), Anna at Grabenhalle in St. Gallen (CH), Hansjörg & Andreas at Spielboden in Dornbirn (A), Stefan & everyone at Rainbow in Immenstadt (D), Francis at Spirit of 66 in Verviers (B), and Kees & everyone at Nieuwe Nor in Heerlen (NL).

We expect to have an official Guinness (TM) confirmation of this record in the next 2 to 3 months.

Until then, pick up a copy of Jeff´s new album "Living Room Sessions" and catch him on tour with Allan Holdsworth: