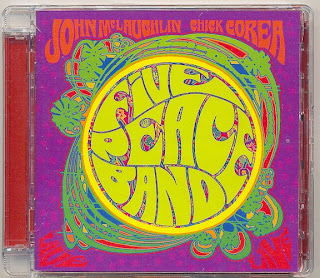 The project that all fusion fans have been awaiting since the 70s is now finally happening. It is indeed about 40 years ago that Chick Corea and John McLaughlin played together, when they joined the sessions for Miles Davis' "Bitches Brew" for Columbia as well as on Wayne Shorter's 1969 underrated "Super Nova" album for Blue Note (on which Corea played drums!) Not to mention their meetings on Larry Coryell's "Spaces" for Vanguard, and "Joe Farrell Quartet" for CTI.
This brand-new 2-CD set reunites them with super players Christian McBride (acoustic & electric bass), Vinnie Colaiuta (drums) and Kenny Garrett (alto sax). This unit toured round the world soon after the "Return To Forever Reunion Tour" ended in mid-2008, and received great applause everywhere they went. The double-CD includes hot live material from their shows in Europe during October & November 2008, with a special guest appearance by Herbie Hancock on "In A Silent Way/ It's About That Time."
Disc 2 is my favourite, beginning with a straight-ahead take on Jackie McLean's "Dr. Jackle" and ending with the jazz standard "Someday My Prince Will Come", performed as an acoustic piano/electric guitar formidable duo. The tracklist is completed by the unit's own original tunes: two by Corea ("The Disguise" and "Hymn To Andromeda," on which Garrett steals the show) and three by McLaughlin ("Raju," "New Blues, Old Bruise" and "Senõr C.S.").
Obviously, the tour was also filmed and a DVD will probably be released in the Summer.
Posted by Arnaldo DeSouteiro at 4:56 AM