DVD of the Day - "Jethro Tull: Jack in the Green" 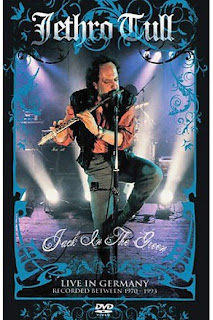 This 2008 DVD release brings together Jethro Tull live performances filmed in Germany over a long period of time. The main concert comes from 1982 with further material from 1986. Two bonus tracks from 1993 and 1970/ya are also included. The release is fully approved by Ian Anderson and the packaging features photographs from his personal archive.

British rockers Jethro Tull are known for their experimental forays into the worlds of folk, jazz, and classical, and also for the inimitable antics of their frontman, Ian Anderson. "Jack in the Green" is a compilation of footage shot for German television that begins with a couple of clips that aired in the early 1970s on the Beat Club show. The bulk of the material is taken from various appearances throughout the '80s, specifically from a full-length concert shot for the Rockpop show in '82. The package concludes with clips of "My Sunday Feeling" and "So Much Trouble," which were captured on camera in 1993.