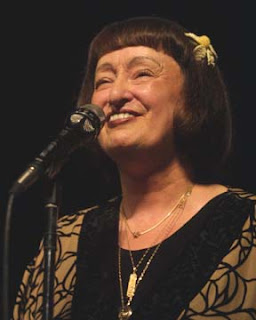 Don't expect legendary jazz icon Sheila Jordan to stop singing any time soon."I'll retire when I die," she asserts. "This is what I do and it's been very good to me. I am blessed." Sheila Jordan continues her relentless schedule making her sixth trip to Europe this year with over 100 concerts. She recently performed in Edmonton and Calgary in celebration of her upcoming 80th birthday November 18th showing the audiences and jazz fans why she's considered one of the greatest jazz vocalists of all time. Ms. Jordan will be returning to Canada to perform at Upstairs Jazz Bar & Grill in Montreal on November 21 & 22.

Ms Jordan was also featured this week on NPR Radio Jazzset with Dee Dee Bridgewater in a live performance honoring her with the 2008 Mary Lou Williams Award for a Lifetime of Service to Jazz. "You know you're getting old when they start giving you awards," laughs Jordan. "But I never started out in this music to be a diva. I just wanted to be a messenger, and that's what I am, carrying the message of this wonderful music of jazz."

But before she packs up for Canada and more International tours, Sheila Jordan will celebrate her 80th birthday in a special celebration with a series of performances November 18th - 20th at Dizzy's Coca Cola with a string quartet featuring the music of Charlie Parker and other great composers. "I was 14 when I heard Bird on the radio and I knew this was the music I wanted to dedicate my life to." Her long time accompanist Steve Kuhn will join her on piano with his trio consisting of David Finck, bass; Billy Drummond, drums; and the string quartet with Mark Feldman, violin; Barry Finclair, violin; Vincent Lionti, viola; Harold Birston, cello. Set times are 9:30 and 10:30 with reservations required. Contact 212.258.9595 or visit http://www.jalc.org/

The same day her new live recording release, "Winter Sunshine," on the Montreal-based label Justin Time Records will be released to add even more excitement to the celebration. "Winter Sunshine", her first release for Justin Time, is Jordan's 21st album under her own name (in addition to dozens of guest appearances on albums by well-known jazz instrumentalists). The recording was cut live in Montreal on Valentine's week 2008. For more information go to: http://www.sheilajordanjazz.com/ or http://www.soundvisionsmedia.com/
Posted by Arnaldo DeSouteiro at 4:16 PM