American jazz saxophonist Wayne Shorter's acclaimed quartet with Danilo Perez, John Patitucci, and Brian Blade, and the legendary Cuban pianist Chucho Valdes are among the headliners at the 6th annual Panama Jazz Festival, which will take place in Panama City January 12 through 17, 2009. The Boston-based Panamanian pianist Danilo Perez, who founded the festival in 2003 and whose Danilo Perez Foundation coordinates its educational component, anticipates more than 16,000 attendees.

"The Panama Jazz Festival has been a magical journey to a dream we've had for years in Panama," says Perez, who has released in 2008 his best album ever, "Across The Crystal Sea," a stunning collaboration with Claus Ogerman that is also one of the Top 10 releases of the year. "We, as a country, see the entire world pass through the Panama Canal every day, and we are honored to be the bridge of the Americas. But today, we are proud to say that every year -- for the past six years -- the Panama Jazz Festival has been the national event where the world does not pass by, but makes a stop in our wonderful land. The world's best jazz artists, as well as students and volunteers from all over the globe, unite in Panama with one goal in mind: to celebrate the world's diversity through jazz."

The 2009 festival will be dedicated to the late bassist, composer, and arranger Clarence Martin Sr., whose contributions to Panamanian jazz date from the 1940s and have influenced several generations of musicians from many genres such as jazz, classical, and Caribbean music.

The festival will open with a gala concert at the Teatro Nacional by a flamenco jazz group from Spain, sponsored by the Spanish Embassy. Other artists scheduled to perform at the festival are the Puerto Rican saxophonist Marco Pignataro and his quintet, featuring Eddie Gomez and Billy Drummond; American singer Luba Mason, whose quintet includes flute master Hubert Laws, bassist Jimmy Haslip, and vocalist Ruben Blades (Mason's husband, and Panama's Minister of Culture); and the young Panamanian saxophonist Jahaziel Arrocha, who won a Berklee College of Music scholarship at the 4th annual Panama Jazz Festival and currently attends Berklee as a Presidential Scholar.
Education, Auditions, Expansion

Auditions for admission and scholarships to the New England Conservatory, Berklee College of Music, and the Conservatorio de Puerto Rico will be scheduled during the week of the festival. Also planned are ensemble, flute, trumpet, guitar, composition, drum, bass, piano, and saxophone workshops by the New England Conservatory Ensemble, led by jazz department chair Ken Schaphorst, and master classes by Berklee professors Jim Odgren and Jim Kelly. All classes will take place at the Ascanio Arosemena Educational Center, on the Panama Canal Administration Campus. Chucho Valdes, John Patitucci, Brian Blade, and pianist Edna Golandsky (with the Golandsky Piano Institute) are among the artist/instructors.

For the fourth consecutive year, the Panama Jazz Festival will offer clinics and courses on music technology under the auspices of the Berklee College of Music Production and Engineering Department (MP&E) and Music Synthesis Department (MS). Courses on recording, mixing, and live sound will be presented by Rob Jaczko, Chair of MP&E Alejandro Rodriguez, Associate Professor of the MP&E Department; and Neil Leonard, Chair of Berklee's Music Synthesis Department.

The keynote for the 2009 festival is "expansion," notes Perez (left), as the concert lineup expands from 3 to 5 days a week and the scope of the master classes expands to include a new private lesson component. "We're also reaching out even more than before to other disciplines, such as art and dance, and we're opening a classical music department," says Perez. "We're expanding our scholarship opportunities to Panamanian schools in need by giving admission to the festival to students who demonstrate academic progress. And we are expanding our children's program to include even more communities in need of outreach programs."

A complete schedule of musical and educational events, as well as information about festival travel packages, will be available at www.panamajazzfestival.com Tickets will be on sale through the festival site as of December 1st. 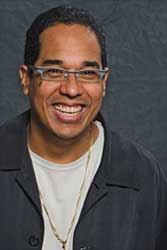 About the Panama Jazz Festival Logo

In the 2009 festival's logo, the silhouette of our country and the visible trace of the Panama Canal is surrounded by a green sea that represents our ecological and musical diversity (EcoMusical diversity), inviting the viewer to experience the balance between human and natural sound. Today, we celebrate our country's heritage with jazz music, and even when we face great economic, social, and political challenges, we can say that we are a nation with an immeasurable cultural legacy."
--Danilo Perez
Posted by Arnaldo DeSouteiro at 2:34 PM