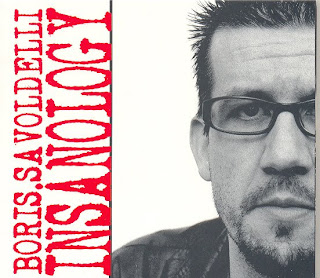 It's not Parker's "Anthropology" nor "Ornithology". It's Boris' "Insanology", one of the most intriguing vocal projects to come along in years. In this very challenging & adventurous album, the Italian singer performs alone in most of the songs - except for the title track and "Mindjoke", on which guitarist Marc Ribot guests. Like Mark Murphy, his teacher and adored idol, writes in the back cover: "Boris is one of the great undiscoverd preponents of simply superb singing and this CD proves it..." But Boris doesn't imitate Mark. He is his own man.

Through the use of electronic devices, Savoldelli is able to overdub his voice many times, creating stunning effects. Better: he sings with himself and creates his own choirs, reminding me of some of the best work by Urszula Dudziak in the 70s.
According to Boris' own words: "My CD is an experimental vocal project recorded using only a looper machine and no musical instruments, except for 2 tracks played by Marc Ribot on guitars.
The work starts from a mantric vision of each song, where overlapped loops of small harmonic and rhythmic patterns create the songs in an exquisite and complex balance."

Boris also wrote almost all songs, except Jimi Hendrix's classic "Crosstown Traffic" (one of Gil Evans' favorite tunes) and "In the Seventh Year" (Mark Murphy & Uli Rennert), my personal favorite track on "Insanology"; I swear I came to this conclusion at the first listening, before reading on the liner cover that my dear friend Mark was the composer.
"An arresting mix of painstakingly overdubbed vocals, human beatbox effects, African-inspired choral music, plus the odd visit to the world of Jimi Hendrix," says Chris Parker (on the Vortex website) about "Insanology", one of the best vocal albums of the year.
*****
Tonight, November 25, and also this coming Saturday, November 29, the Boris Savoldelli Trio with Nik Mazzucconi (bass) and Joe La Viola (sax) appears at Circolo Culturale Masetti, Bolzano.
SPOSTATO AL 17 GENNAIO 2009 CAUSA NEVE!!!
Posted by Arnaldo DeSouteiro at 3:09 PM