CD of the Day - "Alex Maguire: Brewed in Belgium" 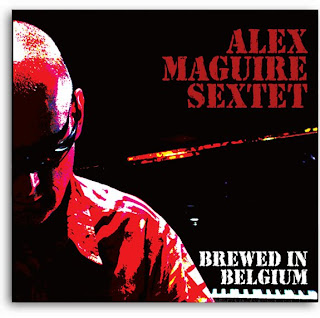 British born jazz and jaz-rock-fusion pianist/keyboardist/composer Alex Maguire, has studied with John Cage and Howard Riley, and has performed extensively around the globe. Among others, he has worked with Michael Moore, Elton Dean in several projects (including Newsense, Headless, EDQ etc), Pip Pyle's Bash, and was keyboardist of reformed Canterbury scene legends Hatfield & The North (2004-2006, with Phil Miller, Richard Sinclair and Pip Pyle). He is also founding member of newborn InCaHat with Phil Miller, Fred Baker and Mark Fletcher (a band performing the music of In Cahoots, Hatfield & The North and National Health).

Alex Maguire and the fine fleur of Belgian jazz and jazz-rock musicians team up to launch a repertoire ranging from lyrical to groovy tunes, haunting melodies, free improvisation and high-energy interaction. In this record, Maguire’s Belgian sextet includes Jean-Paul Estiévenart on trumpet, Michel Delville on guitar and guitar-synth, Damien Polard on bass and Laurent Delchambre on drums (four members of notable Belgian rock-jazz band and another exclusive MoonJune recording artist The Wrong Object) as well as Flemish saxophonist, now based in New York City, Robin Verheyen (who has just released his first solo opus with American pianist Bill Carrothers).

The quality of this recording, which was captured live by VPRO (the Dutch National Radio) in October 2007, confirms Maguire’s status as a vital presence on the international jazz scene, one which is capable of lacing the most intense lyricism with a juicy experimentalism that is reminiscent of Cecil Taylor’s best work and results in what is perhaps best described as a paradoxical and delightfully unstable form of “lyric experimentalism”.

Maguire’s talents as a pianist and a keyboard player are so diverse, his “touch” so personal (Maguire belongs to that class of musicians who have succeeded in developing their own, immediately recognizable sound), his telepathic conversations with the other musicians in the band so explosive and brilliantly unpredictable that the line that divides the written parts from the collective improvisations is often impossible to draw. It is a tribute to the sextet’s improvisational skills that the mixture remains coherent and fascinating throughout despite the wide range of styles that characterizes this highly unusual record. These, of course bear the mark of Canterbury School prog-jazz, but hey also contain swinging upbeat tunes such as “John’s Fragment”, poignant, meditative and mournful hymns such as “Psychic Warrior” (Maguire’s compositions dedicated to late Softmachinist and British saxophone jazz legend Elton Dean) as well as faster-than-light melodic improvisations like “Pumpkin Soup” that flow in and out of funky syncopated cadences and English pastoral flavors.
*******
Liner Notes:
"Water, hops, malt and barley – all fine ingredients in their own right, I’m sure you will agree, but it’s only really when they are lovingly brought together by the masterbrewer that they leapfrog up the culinary ladder and assume regal status. His skill and experience conspire to transform the ordinary into the divine – it’s no coincidence that some of the finest brews are the creation of monastic communities! In Belgium, this art is taken to unprecedented heights and becomes the art of liquid cooking and I absolutely love to cook; to take a bunch of disparate elements and inveigle them into an entirely new unity. Individual flavours give up their unique identities in the interest of the whole ensemble; thus it was with this project.I first met Michel Delville at the Spirit of 66 in Verviers, Belgium, when I was playing there with Pip Pyle’s BASH! We made an immediate connection and there and then planned a future “cook-in”. The intervening years up to October 2007 saw us formulating separate yet related recipes; Michel got busy cooking with his band The Wrong Object and with Elton Dean (the result of which can be heard on the great “The Unbelievable Truth” cd) whilst I continued my sous-chef training with Pip and the newly-reformed Hatfield and The North.After the untimely departures of our head-chefs, it seemed apposite to take some of their recipes (how I miss Pip’s divine pork with cherries and Elton’s ‘secret’ chicken satay!) and see if we could add a few ingredients of our own.This is the final dish, and for us, it’s a new “fusion-food”, rooted in tradition yet bristling with some previously undiscovered herbs and spices. Taste it for yourself and let your ears savour it!Needless to say, we weren’t alone in the kitchen and none of this would have been possible without our esteemed musico-cookery comrades, Robin, Jean-Paul, Damien and Laurent – we salute you chefs! Additionally, the food would never have made from the kitchen to the table without the invaluable assistance of Henk Weltevreden (insistent attention to taste and freshness of ingredients) and Danny Mathys and his family – people who put the pump back into pumpkin soup. The last round must inevitably be bought for the New York chef master Leonardo Pavkovic, without whom this particular brew would never have made it fromhop farm to table top – cheers, alla salute, prost, chin-chin, à saúde, nazdravlje and santé to you.Enjoy with something “Brewed in Belgium!” Bon appétit." - Alex Maguire
Posted by Arnaldo DeSouteiro at 7:59 PM