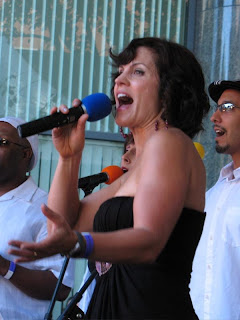 This is it! Tomorrow night it's Alexa Weber Morales' *first time headlining* at Yoshi's Jazz Club in Oakland's lovely Jack London Square. She has almost sold out the 8 pm show, and guess what, folks -- "we had our fans in mind when we decided to make this FREE show rather than $16 per ticket," Alexa says. Yoshi's has done a few of these in the last few months, but they want
you to know that this will be the *last* free show for a long while. Please don't take this amazing place for granted!

Alexa: "I am so honored to be playing a club that just hosted a run of McCoy Tyner shows last week! I promise you, if you come down (and bring kids, they are more than welcome), you will leave our concert with an enjoyable lightness of being, a desire to be more color-coordinated
and a new fondness for fish! You will want to clap more frequently and laugh louder than anyone else. You will invest in dance lessons promptly, if only to ensure you do not dance like I do! And one week later, your significance in the universe will be revealed in a fortune cookie accidentally delivered to your table by a spastic waiter with Tourette's."

It's all connected, and so are we. Don't miss AWB tomorrow night!

Oakland singer-songwriter Alexa Weber Morales performs at Yoshi's Jack London Square with a crack team of musicians Tuesday, November 25 at 8 and 10 PM. The Alexa Weber Morales Band has enjoyed success throughout this year, starting with a three-night run at Jazz at Pearl's in San Francisco and continuing through the San Jose Jazz Festival. At recent shows, the exuberant performer has emphasized the Brazilian segment of her repertoire, including selections from her Wayne Wallace-produced albums "Vagabundeo" ("Wanderings") and "Jazzmérica," the latter being my personal favorite; songs by Edu Lobo ("Ave Rara"), Caetano Veloso ("Luz do Sol"), and her own originals, most of them filled with smoking grooves like "The Goddess of War" and "I Did It, I Live It." Hope she will also sing her amazing versions of Stevie Wonder's "Smile Please", Clare Fischer's "Morning," and Miles Davis' "All Blues" (in 6/8).

With her trademark spectrum of world music including salsa, Brazilian, Caribbean and funk, Alexa Weber Morales brings a refreshing authenticity to the stage. "I find her command of Latin idioms completely convincing, entrancing even," writes Village Voice critic Tom Hull, while the San Francisco Chronicle predicts, "With a voice sweet, pure and strong, Alexa Weber Morales is poised to ride the Bay Area Latin jazz scene to national recognition."

These two shows are free of charge as a special "Audience Appreciation Night" at the peerless jazz club. Reserve your tickets online today ($3 service fee applies)!
Posted by Arnaldo DeSouteiro at 12:39 PM