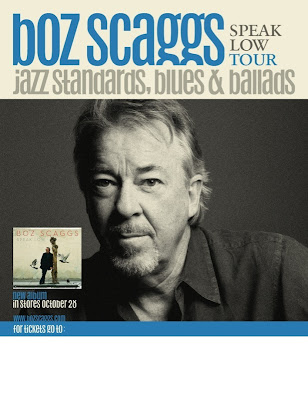 Boz Scaggs returns to Boston for two performances at the newly refurbished Wilbur Theatre on Sunday, November 23 at 4:00 p.m. and 7:30 p.m. The Wilbur Theatre is located at 246 Tremont Street in Boston’s Theatre District. Tickets at $50 [cabaret seating and front mezzanine section] and $40 [balcony, theatre-style seating] are on sale on now at The Wilbur Theatre Box Office, at all Ticketmaster outlets, on line at www.ticketmaster.com and by phone by calling: 617-/508-931-2000. For more information, call: 617-248-9700.

Boz will have a stellar band with him at the Wilbur shows: pianist and musical director Gil Goldstein (with whom I had the chance to work in the "Guanabara" project for CTI Records in 1991), bassist Steve Rodby (longtime Pat Metheny Group's bassist/producer), drummer and percussionist Jason Lewis, Bob Sheppard and Paul McCandless (the oboe master who contributed to seminal records by Oregon, Paul Winter's Consort and Carla Bley) on reeds and vocalist Miss Mone’t.

Sitting in his office behind Slim's nightclub one afternoon, Boz Scaggs thumbed through a Chez Panisse cookbook in search of a good quince recipe. The quinces at his home on Napa County's Mt. Veeder were ripening and Scaggs was intent on finding the perfect holiday dessert to make with them.

Foodies and vintners come in all stripes, even in the garb of a top-of- the-charts 1970s rock singer turned critically acclaimed jazz crooner. In 1997 Scaggs and his wife Dominique, who plan to launch a commercial brand next year, bought a property in the Mayacamas mountain range that divides Napa and Sonoma counties.

Although Scaggs liked wine, becoming a vintner wasn't initially part of the plan.

"We were having some fruit trees and olive trees planted and a fellow said he had some vines left over from a job earlier that day and did I want to plant them," says Scaggs, a part owner of Slim's who divides his time between Napa and an apartment in San Francisco.

One-third of an acre of Syrah went into the ground; Scaggs went on tour and forgot about it. But when he returned, "it was a warm September night and there were little grape vines stickin' out of the ground," says the Texas native, tenderly. "We started looking after the vines and it's just been a pretty seductive process."

Scaggs, who is particularly enamored of wines from France's Rhone Valley, went to work researching rootstocks and talking to neighbors and local growers. The old-timers told him that Mourvedre -- also known as Mataro -- was popular on Mt. Veeder in decades past, when Italian wine families dominated the area.

So in 1998, Scaggs planted Mourvedre and Grenache, which along with Syrah form the basis of many Rhone blends. The result is just over 2 acres in the approximate ratio of grapes from the Rhone Valley towns of Beaucastel and Gigondas, Scaggs says: 46 percent Mourvedre, 38 percent Grenache and 16 percent Syrah.

The grapes are farmed organically, although Scaggs says he doesn't intend to go through the lengthy process of having the vineyard certified.

Today the property is producing charming, complex wines, but their quality wasn't clear at first. The initial harvests were ruined by a bacterial infestation in the winery where they were made, Scaggs says.

He sought a new winemaker and in 2002, John Olney, the vice president and winemaker for Ridge Lytton Springs, agreed to make the singer's wine in Olney's Healdsburg garage.

Olney's winemaking brought out the exceptional qualities of Scaggs' grapes. The wine "is special. Delicious. You slurp it down," says Berkeley wine merchant Kermit Lynch, who is friends with Scaggs and introduced him to Olney.

Scaggs bottled two blends of his 125-case 2002 vintage, which will not be commercially released -- one Mourvedre-dominant and the other mostly Grenache. Both are exceptional wines with velvety textures, rich fruit and the charming spiciness the Rhone varietals are known for.

The wines were so good that I invited friends over to help finish them instead of regretfully pouring them down the drain, which I often do with even very good wines. Not a drop of Scaggs wine was left for the sink.

For the 225-case 2003 vintage, Scaggs, Olney and Lynch decided to create an old-fashioned "field blend" by throwing the entire harvest together, rather than aging the varietals separately and trying to craft the perfect mix.

"We decided it would be simpler and just as good as anything we might try to conjure up," says Scaggs.

The wine shows great promise, although it is still in its fetal stages. Like many good, young wines, it tastes and smells rough-hewn, but shows a rich character, great depth of fruit and should soften and integrate with some time in the bottle.

The singer, who says he plans to call his new wine brand Scaggs, also intends to sell a dry rosé and a small amount of Roussanne. Prices have not been set; Scaggs says he doesn't expect wine to be a big profit center, but he also doesn't want to lose money on the venture.

For now, Scaggs is neck-deep in the legalities of launching a wine brand, which includes state, federal and local licensing and label approvals from the U.S. Alcohol and Tobacco Tax and Trade Bureau.

The singer hopes to sell the 2003 wines by next fall via his Web site, bozscaggs.com, and a few white-tablecloth restaurants.

Lynch, who owns a vineyard in Gigondas, has been advising Scaggs on going commercial. Lynch says he likes his friend's wine so well that he would consider selling it in his Berkeley shop, although he typically carries only European wine.

Scaggs is slowly learning the winemaking process; this fall he had responsibility for testing the Brix (sugar content) of the grapes and making harvest decisions -- as well as trucking the grapes to Miner Family Vineyards in Oakville, which is making his 2004 vintage wines. Becoming a winemaker "is quite a venture," says Scaggs. "I'd like to, but I don't know. We're taking things as they come for now."
Posted by Arnaldo DeSouteiro at 11:27 AM