"Brazilian Mood" marked the British recording debut of Rio de Janeiro-born composer, arranger, conductor and keyboardist Mario Castro-Neves. Originally produced in 1973 by Franklyn Boyd for Decca's 'Phase 4' series of quadraphonic recordings, it features a band consisting of a stellar cast of UK session musicians plus, on some tracks, a chorus including the sublime vocals of Norma Winstone.
By the time of this recording, Mario - brother of Oscar, Leo and IKo Castro-Neves – was already established as one of Brazil's leading musical talents. In the 1960s he had recorded the legendary "Mario Castro-Neves & Samba S.A." for RCA's Brazilian division (its CD reissue was produced by Arnaldo DeSouteiro for BMG in 2001, adding four previously unreleased bonus tracks) and had scored music for various Brazilian films and TV series. He attended the country’s prestigious music conservatory - Seminários de Música Pro-Arte - where he studied arranging and composition.
In "Brazilian Mood" Mario brings all his experience and expertise to bear, crafting an album of up-to-date, '70s style Latin American music that's full of vitality, pulsing rhythms and modern instrumentation including electric bass, electric guitar, xylophone (instead of the most usual vibes), percussion and acoustic piano (played by Mario himself) plus trombones, baritone sax, bass clarinet, violas and cellos (no violins!) Seven of the ten tracks are by Castro-Neves and range from the funky, infectious groove of "Xaxado Blues" to the touching charm of "Helena and I" and "The Whole Mess", two songs he eventually would re-record in 2004 for his acclaimed "On A Clear Bossa Day" CD, produced by Arnaldo DeSouteiro for the JSR label.
The lovely bossa-ballad "Hold My Hand" was co-written by Mario and his wife in London at that time, Helena Castro-Neves (born Helena Valladares, former wife of Fernando Sabino and daughter of Benedicto Valladares, who had been Governor of the Minas Gerais State.) Helena also inspired the album highlight, "Helena and I", a track included on the 2-CD set compilation "A Trip To Brazil Vol.2: Bossa & Beyond", produced by Arnaldo DeSouteiro for EmArcy Records/Universal in 1999.
Mario also comes up with beautiful, modern Latin arrangements of tunes by Michel Legrand & Norman Gimbel (Watch What Happens), Burt Bacharach & Hal David (The Look of Love) and Antonio Carlos Jobim (Wave). As well as displaying Mario Castro-Neves musical gifts, "Brazilian Mood" is an excellent example of how by the 1970s bossa-jazz-influenced Brazilian music had reached new levels of extraordinary sophistication becoming "universal music".
As Arnaldo DeSouteiro wrote in 2004 in the liner notes for "On A Clear Bossa Day":
"Firstly, “2004 Thanks” to the legendary Brazilian music historian and radio DJ, Simon Khoury, for introducing me to Mario Castro-Neves’ artistry, back in 1973, through Castro-Neves’ “Brazilian Mood” LP. His superb orchestrations on that masterpiece album would be enough to place Mario Castro-Neves among the best arrangers in the music history, alongside Sebesky, Ogerman, Mancini, Legrand, Schifrin, Mandel, Gil Evans, Deodato and Gaya. It is a privilege and a great honor to work with him! Mr. Khoury used to give airplay, at JB-AM radio station, to such songs as “Helena And I” and “The Whole Mess” (both from “Brazilian Mood”). I could never dream that, thirty years later, I would produce new versions of these gorgeous tunes".
***************


Lennie Dale's second album as a "singer", it was produced by Aloysio de Oliveira in studio after a long engagement of Lennie with the São Paulo-based Sambalanço Trio at the "Zum Zum" nightclub in Rio. Previously reissued only on vinyl format (back in 1994 by the Japanese label Lexington on its "New Balanço" series supervised by Minoru Wakasugi), includes superb renditions of "The Lady is a Tramp", "O Pato" and "That Old Black Magic".
************* 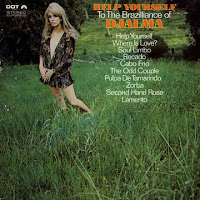 Recorded in 1968, it's the best album recorded by Brazilian organ player Djalma Ferreira (Rio 1913-LA 2004) in the USA, for Paramount's subsidiary label Dot Records (Luiz Bonfá and Lalo Schifrin were also under contract to Dot by that time). Nowadays, the late Djalma is best remembered as the composer of the bossa nova standard "Recado Bossa Nova", recorded by many jazzmen like Zoot Sims, Al Cohn, Hank Mobley, Tito Puente, Laurindo Almeida, Mel Tormé, Marty Paich and The Hi-Lo's in the 60s and most recently revisited by Ithamara Koorax ("Wave 2001"), Manhattan Jazz Quintet ("MJQ Plays Blue Note") and Paula Faour ("Cool Bossa Struttin'"). A close friend of Djalma, Laurindo also recorded "Foi A Saudade" on his "Collaboration" album with the Modern Jazz Quartet for the Atlantic label. And Djalma appeared as special guest, along with Fafá Lemos, on Laurindo Almeida's Grammy-winning album "Guitar of Ipanema" (Capitol), which includes Djalma's "Izabella".
"Recado" is included on this Dot album, along with Neal Hefti's "The Odd Couple" plus "Help Yourself", "Where Is Love?", "Soul Limbo", "Cabo Frio", "Pulpa De Tamarindo", "Zorba", "Second Hand Rose" and "Lamento".
Btw, Djalma Ferreira was the real pioneer of "independent releases" in Brazil, when, in the late 50s, he founded his own Drink label (Drink was also the name of the nightclub he owned in Rio de Janeiro) to release his albums.
You can pre-order it at Amazon:
http://www.amazon.com/dp/B00164PODM/ref=nosim/?tag=onmeta2-20&creative=380333&creativeASIN=B00164PODM&linkCode=asn
Posted by Arnaldo DeSouteiro at 9:37 AM