CD of the Day - "Psychedelic Jazz" 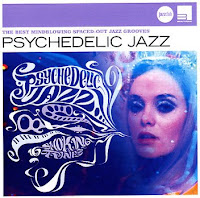 CD of the Day
"Psychedelic Jazz: The Best Mindblowing Spaced-Out Jazz Grooves" (Verve JazzClub) 2008
Compiled by Götz Bühler, Felix Jobst & Stephan Steigleder
My personal favorite tracks: Gabor Szabo's creative reading of "Summertime" and the original version of his own "Mizrab" from the 1966 "Jazz Raga" LP for Impulse! on which he played both electric guitar and sitar, backed by Johnny Gregg on bass and Bernard Purdie on drums (later on he would re-record "Mizrab" as the title track of his CTI debut album in 1972 with Ron Carter and Billy Cobham).
Speaking of guitarists, Larry Coryell almost steals the show on Don Sebesky's "Guru-Vin" from the yet to be reissued on CD "The Distant Galaxy" (Verve), a longtime Mojo club favorite and a dancefloor-jazz anthem.
There's also Pierre Henry & Michel Colombier's "Psyche Rock", Dorothy Ashby's "The Moving Finger", Jimmy Smith's "Burning Spear" (arranged by Oliver Nelson with Carol Kaye on bass and Grady Tate on drums), Dave Pike's "Mathar" and Roy Ayers' "The Fuzz".
*********
available at www.dustygroove.com
That's what they say:
"Psychedelic Jazz galore -- a wonderful look at the hip blend of funky grooves and tripped-out production that emerged at the end of the 60s! The sounds here are every bit as amazing now as they were a few decades back -- a genre-busting blend of electric instrumentation, chunky rhythms, and weird techniques -- all mixing up elements from soul, funk, rock, Latin, and other sources into a really unique sort of groove! The work here is both from the US and overseas -- pulled from Universal-owned labels like MPS, Chess, and Philips -- and the package does a great job of mixing key examples of the genre with some other under-reissued gems. 16 tracks in all -- including "The Squire" by Mike Nock, "The Fuzz" by Roy Ayers, "Burning Spear" by Jimmy Smith, "Summertime" by Gabor Szabo, "Zoom" by Volker Kriegel, "Uwiii" by Wolfgang Dauner, "The Moving Finger" by Dorothy Ashby, "Big Family" by Free Orbit, "Love Me" by Johnny Teupen, "Ganges Delta" by Okko, "Misty Purple" by Kuhn Brothers & The Mad Rockers, "Guru-Vin" by Don Sebesky, and "Season Of The Witch" by Julie Driscoll & Brian Auger." ©Dusty Groove America, Inc.
Posted by Arnaldo DeSouteiro at 8:25 AM