James Carter's new CD comes out today in the USA!

James Carter, a perennial winner on the DownBeat polls, debuts on Emarcy Records with "Present Tense"

Saxophonist's First New Recording in Three Years,
Produced by Michael Cuscuna,
Is Set for Release May 20

Ever since he arrived in New York City from his native Detroit at age 21, James Carter's awesome virtuosity on a number of instruments and his postmodernist embrace of the past, present, and future of jazz have been causing listeners' jaws to drop. A consistent winner and/or runner-up in Down Beat polls, the now-39-year-old musician most recently placed at number one on baritone saxophone and at nine on tenor saxophone in the magazine's Readers Poll, and at number two on baritone and ten on tenor in the Critics Poll.

Carter is featured on both horns, as well as on soprano saxophone, bass clarinet, and flute, on Present Tense, which will be released May 20 by Emarcy Records, a division of the Decca Label Group. Produced by Michael Cuscuna, himself a frequent Down Beat poll winner, the CD is Carter's first new recording in three years and his first for a major label in four. He's joined by a highly empathetic cast of players: trumpeter-flugelhornist Dwight Adams, pianist D.D. Jackson, bassist James Genus, and drummer Victor Lewis, who appear on all ten selections, and guitarist Rodney Jones and percussionist Eli Fountain, who contribute to several tracks.

"I titled this album Present Tense because it captures where I am right now," states Carter, who began his recording career in 1991. "This is what appeals to me right now. I've always had eclectic tastes, so the styles of these pieces are diverse. But I'm also dealing with more lyricism on this album, and I'm making more concise statements in the music versus playing out for 10 or 11 minutes. Some of the tunes are in the four-minute range."

Present Tense is perhaps the quintessential James Carter album. "On going through James's entire output prior to recording Present Tense," Cuscuna explains, "it struck me that many of his albums are ingenious concepts. As successful as each was, none of them captured the breadth of James's mastery of this music." 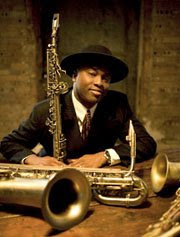 Carter draws directly from the jazz tradition on the new disc, yet, as has always been his habit, he takes conscious liberties with it. On the bopping opening track, a tune by trumpeter Dave Burns titled "Rapid Shave" that was previously recorded by tenor saxophonist Stanley Turrentine, Carter opted to play baritone instead of tenor. For the Victor Young-Ray Evans-Jay Livingston composition "Song of Delilah," associated in jazz circles with trumpet legend Clifford Brown and tenor colossus Sonny Rollins, Carter blows some Coltranesque soprano before beginning a two-tenor duet with himself, all over a hip-hop-like groove. He also plays tenor on his original "J.C. Bossa" in a performance that is in some ways reminiscent of Gene Ammons's classic "Ca'Purange (Jungle Soul)."

On other selections, he pays homage to two of his heroes and one heroine. "Bro. Dolphy," an original Carter composition, salutes the late, great Eric Dolphy and is played on bass clarinet, one of several instruments on which Dolphy was a master, much as Carter is today. Carter further displays his virtuosity on bass clarinet with the gentle "Shadowy Sands," a tune by pianist Jimmy Jones that Duke Ellington had utilized as a rare bass clarinet showcase for his baritone saxophone star Harry Carney. The haunting tango-tinged ballad "Sussa Nita," played by Carter on tenor, was inspired by Billie Holiday, who in a dream, Carter says, gave him the song's opening phrases.

Django Reinhardt wrote the lovely "Pour Ma Vie Demeure," though he never recorded it himself. Carter performs it on soprano saxophone. "James's tone on soprano," Cuscuna comments, "is absolutely gorgeous with all the size and strength and romance that one associates with Sidney Bechet."

Carter again wields the big baritone on Gigi Gryce's "Hymn of the Orient" and on a rhapsodic rendition of the standard ballad "Tenderly," which he recorded at his wife's suggestion. And on "Dodo's Bounce," penned by pioneering bop pianist Dodo Marmarosa, Carter displays breathtaking control of the flute. "It's a select group of reedmen that know how to play this instrument and improvise," Cuscuna says. Carter is clearly one of them.

There are few jazz musicians, past or present, who have demonstrated such absolute command of as many instruments as James Carter does. He stands as one of the music's greatest living virtuosos, and ample proof is provided throughout Present Tense.

Carter will celebrate the release of Present Tense with a septet engagement at Birdland, New York, on May 21-24. He appears the following month at Iridium with Odean Pope (June 5-8). Tours of Europe and Japan are planned for July and August respectively. The saxophonist heads home to Detroit September 1 to perform at the Detroit International Jazz Festival; soon to be announced are September dates in Boston and San Francisco. 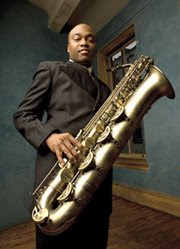 Posted by Arnaldo DeSouteiro at 12:25 PM