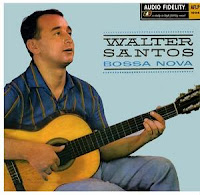 R.I.P.: Walter Santos
Born: Walter Santos Souza on September 9, 1939, in Senhor do Bonfim, Bahia, Brazil
Died: May 29, 2008, in Sao Paulo, SP, Brazil
Guitarist, composer, singer, publicist and record executive. A close friend of João Gilberto since their childhood, when they founded the vocal group Enamorados do Ritmo in 1946 (while both lived in Juazeiro, Bahia), Santos was invited by Gilberto to perform as background vocalist on Elizeth's Cardoso seminal album "Canção do Amor Demais" in 1958, in Rio de Janeiro. Later he married lyricist Tereza Souza and moved to Sao Paulo, recording some singles and LPs for such labels as RCA, Audio Fidelity and Fermata.
The "Bossa Nova" album he cut for Audio Fidelity in 1963, backed by Walter Wanderley, Papudinho, Azeitona and Dinho, was reissued on CD by the Spanish label Ubatuqui/Blue Moon in 2001 under the title "Azul Contente", after the inclusion of his song "Samba Pro Pedrinho" (on which Hermeto Pascoal did his recording debut as a flutist) had been selected by producer Arnaldo DeSouteiro for the critically acclaimed compilation "Focus on Bossa Nova" (BMG), a worldwide release, attracting attention for Walter Santos' work specially in Europe.
Two other excellent songs are "Amanhã" (which received a fabulous recording by Zimbo Trio) and "Vem Balançar", included on Mario Castro-Neves' "Samba S.A." debut album for RCA in 1967 and produced for CD reissue by Arnaldo DeSouteiro in 2001. Elis Regina, Jair Rodrigues, Claudette Soares, Dick Farney, Isaura Garcia, Agostinho dos Santos, Marcia, Pery Ribeiro, Milton Banana, Cesar Camargo Mariano and the short-lived group Brazilian Octopus also recorded Walter Santos' tunes.
In 1974 he decided to concentrate in his work as a publicist, founding the recording studio and the company Nosso Estúdio, composing more than 3,000 jingles and developing a close partnership with the now-defunct Bamerindus Bank, to the point that a whole LP was released in 1981 ("O Som Brasileiro do Bamerindus") comprising some of those themes. That album came out as a special release on the Som da Gente label created that same year, and closed in the mid-90s. In 2003, he did the last recordings as a guitarist in three tracks for his daughter Luciana Souza "Brazilian Duos" album.