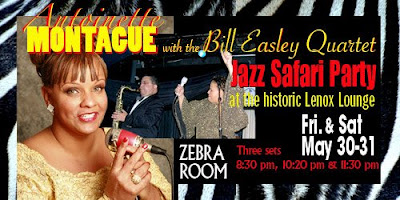 The historic Lenox Lounge has been in the Harlem community since 1939, serving as the back drop for many jazz legends such as Billie Holiday, Miles Davis, and John Coltrane. The Jazz Club also known as the Zebra Room was once used by the Harlem Renaissance writes James Baldwin and Langston Hughes. It was also said to be a hangout for Malcolm X. The Lenox Lounge has been featured in magazines, music videos, photo shoots, and motion pictures. In 1999 it underwent a costly restoration process to bring it back to its original splendor. The Lenox Lounge was voted "Best of the Best" by the 2002 Zagat Survey Nightlife Guide and by the 2001 New York Magazine.
***********
Antoinette Montague

Born and raised in Newark, Antoinette Montague may have just released her first CD, "Pretty Blues" but she has had many invaluable musical experiences. She worked in gospel and R and B ensembles after college, serves as the vice president of the International Women in Jazz, and considers Carrie Smith, Etta Jones, Della Griffin and Myrna Lake to be her mentors. Antoinette has worked extensively in the New York area during the past decade with such musicians as Red Holloway, Benny Powell, Bill Easley, Winard Harper, Wycliffe Gordon, Frank Weiss, Dr. Billy Taylor, the Duke Ellington Orchestra and Mike Longo's New York State of the Arts Orchestra.

"She has a powerful voice, the ability to hold long notes without wavering, and a knack for making every song sound bluesy. Antoinette Montague's delivery is heartfelt, infectious and memorable."
— Scott Yanow, Los Angeles Jazz Scene

Recording and releasing "Pretty Blues" on the Consolidated Artists label raised her profile and has given her fame beyond the East Coast. On this highly enjoyable CD, Antoinette Montague is featured belting out blues, interpreting sensitive ballads, combining passion and sophistication, and making every song sound fresh, infectious and topical.
***********
Bill Easley

"Whether the genre is blues, rhythm & blues, or hard bop, Bill Easley remains a versatile and often silent practician of musical mastery. . .Easley has certainly perfected his craft." — All About Jazz

A brilliant and versatile reed player, Bill Easley performs equally forcefully on alto, tenor, and baritone saxes as well as flute, piccolo, and clarinet. Easley is a renowned session player who has worked with Isaac Hayes and done sessions at Stax. He has performed with the Duke Ellington Orchestra, Benny Carter, George Benson, Jimmy Smith, Ruth Brown, Bill Mobley, Victor Gaskin, Mulgrew Miller, Ron Carter, and Grady Tate, among others. Bill Easley has also recorded highly acclaimed sessions as a leader on the Sunnyside, Milestone, and Evidence labels. His latest release is "Business Man's Bounce" on the 18th and Vine Records label.
Posted by Arnaldo DeSouteiro at 11:26 AM