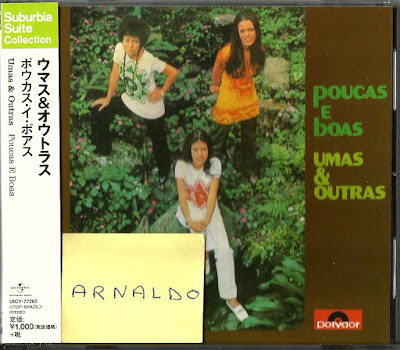 The only album ever recorded by the vocal trio Umas & Outras is coming out today, June 17, 2015, in Japan, by Universal Music LLC, as part of the Suburbia Suite Collection series. Although the album had been previously reissued there on vinyl some years ago, it's the first time it is being released on CD format anywhere on Earth. And, although the group recorded a few other tracks for compilations and TV soundtracks ("Assim Na Terra Como No Céu," "Irmãos Coragem," "Tempo de Viver") during a short-lived career, they never recorded another full LP.

Originally recorded in 1970 for the Polydor label in Rio de Janeiro, "Poucas E Boas" was propelled by the track "Pigmalião," composed by Marcos Valle, Paulo Sergio Valle and Novelli to be used as the main (opening) theme for the soap opera "Pigmalião 70." Actually, the group recorded it in a lovely wordless version, without Paulo Sergio's lyrics, that were recorded only a few months later, by a singer called Evinha (from another vocal group, Trio Esperança), after the song became a hit.

Formed by Dorinha Tapajós, Malu Balona and the most-in-demand backing vocalist from Rio's busy studio scene at that era, Regininha (not to be mistaken with Elis Regina), Umas & Outras recorded a beautiful project that also included a hip tune written by guitarist Nelson Angelo ("Caminhão Amarelo") and two by his wife at that time, Joyce ("Please Garçon" and "Abrace Paul McCartney Por Mim"), plus a psychedelic gem by guitarist Fredera aka Frederyko Mendonça de Oliveira ("No Nepal Tudo É Barato") and a surprising song co-written by Haroldo Tapajós & Vinicius de Moraes ("Loura Ou Morena.")
Posted by Arnaldo DeSouteiro at 9:48 PM