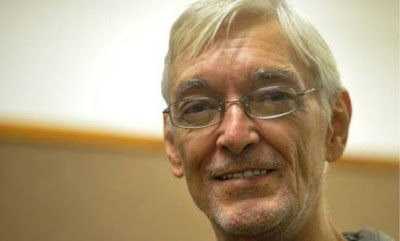 Brazilian writer, lyricist, painter, graphic designer, actor and movie director. He was one of my film teachers at the PUC University (the other was Silvio Tendler).

But I already knew him from many dinners at the famous Lamas Restaurant (Yana Purim, to whom I was married in the early 80s, introduced us), and I already admired him since I heard Wilson Simonal's recording of his masterpiece as lyricist: the bossa ballad "Chuva", co-written in 1964 with Durval Ferreira, originally introduced on the debut album by the group Os Gatos -- to which he also did the LP artwork -- and later covered by Gaya, Dick Farney, Walter Wanderley, Claudette Soares, Sylvia Telles, Elizeth Cardoso, Manfredo Fest, Baden Powell and many more.

Sometimes known as "Rain," it was officially retitled "The Day It Rained" after Ray Gilbert added English lyrics recorded by Sylvia Telles, Sarah Vaughan, The Girls From Bahia (Quarteto Em Cy) and so on. Its most recent recording was done by the superb LA-based Polish singer Beata Pater on her "Golden Lady" CD, released here in the U.S. in 2014.

Camargo collaborated with the late guitarist Durval Ferreira in some other songs, starting with "Sozinha de Você" for Tita Lobo's debut album, "Tita" (1964), that was followed by amazing lyrics to "Verdade em Paz" (sung by Tito Madi and Dóris Monteiro, as well as recorded as an instrumental tune on Walter Wanderley's CTI debut, "When It Was Done"), "Encanto Triste" (written for Rosana Toledo's "Momento Novo" LP but also included on Eumir Deodato's second album, "Idéias"), "Tudo Que É Preciso" (recorded by Johnny Alf) and "Porque Somos Iguais" (featured on Deodato's "Ataque" LP with his band Os Catedráticos in 1965, as well as on Emilio Santiago's debut album released exactly ten years later, in 1975.)

During his childhood, Camargo studied piano with Vera Bertucci, Nise Obino and Lúcia Branco. In 1959, he composed the soundtrack for Andrej Widrzinski's stage play "O sol gira em torno da terra." That was the first of several works as composer for TV and movies. He directed five award winning movies, among them "O Estranho Triângulo" (1970; btw, how much I treasure the album "O Fino da Música No Cinema Brasileiro"!) and "Amor E Traição" (1979), the latter presented in many European film festivals. Rest in Peace.
Posted by Arnaldo DeSouteiro at 6:05 AM