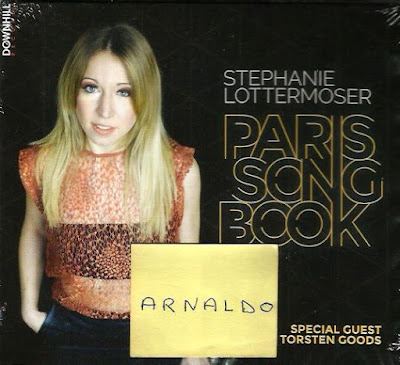 If you like Grover Washington, Jr. and George Benson (and Fender Rhodes sounds!), you'll love this second album as a leader by German saxophonist, flutist and composer Stephanie Lottermoser. Specially such jazz-funk instrumental tracks as "Model Railroad Landscape" (nice Rhodes' contribution by François Faure), "Suddenly" (great Benson-esque guitar solo by Torsten Goods),  "Get It" (a soul-jazz trip with organ sounds spiced by congas & tambourine), "Breeze" and the delightful "Coccinelle," on which she doubles tenor and flute.

She sings, with a fragile voice a la Carla Bruni, on the more pop-oriented songs "Blues," "Pink," "The Day I Turned" and on the blues "I Hope That You Will Miss Me When I'm Gone" (in a duet with Torsten Goods, once again a great Benson disciple, flying beyond the blue horizon in a beautiful solo), "Somebody That I Used To Know" and "This Saturday."

"Most of this album was written during a six month stay at the Cité International Des Arts in Paris between 2013 and 2014," Lottermoser explains in the booklet text. "It's not an album of French songs, but an album with my impressions, stories and memories of my time in that great city. I'm very thankful for that opportunity and all the things I experienced and learned and for the new friends I met!"

Besides the eleven studio tracks, there are three bonus tracks recorded live at the Unterfahrt, Munich's top jazz club: "Step Ahead" (maybe Stephanie's best solo on the date, over an irresistible groove and with a nice wah-wah guitar contribution by Ferdinand Kirner), an alternate live verson of "Blues" and, surprise!, a touching bossa-tinged vocal reading of Charles Trenet's classic French hymn "Que Reste-t-il De Nos Amours," a song that João Gilberto also loves and recorded on his album with Clare Fischer. You did it again, Stephanie!
Posted by Arnaldo DeSouteiro at 9:09 AM