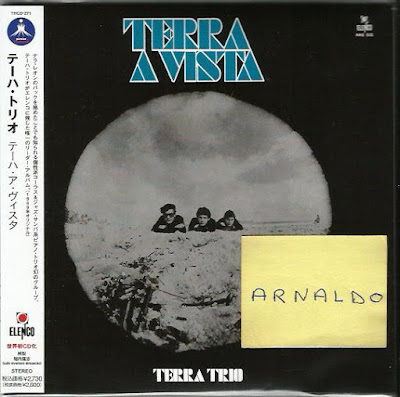 Orginally recorded in 1969 for the famous Elenco label, when it had already been sold by Aloysio de Oliveira (by then once again living here in the USA) to the Companhia Brasileira de Discos (CBD, later known as Phonogram, PolyGram and currently Universal Music), "Terra À Vista" is the one & only album released by the Terra Trio. Never reissued in Brazil in any format, it's available in Japan through the "Pérolas Brasileiras" series of Think! Records, distributed by Disk Union.

Founded by pianist & arranger José Maria Rocha, and brothers Fernando Costa (bassist) and Ricardo Costa (drummer), the group was influenced by both Tamba Trio and Os Cariocas, but in a post-bossa vein. All members also loved to sing, and the trio spent many years as the backing band for songstress Maria Bethania. Btw, the first time I saw them live was in 1975, when, invited by my much missed friend Maestro Gaya, I attended for several nights the "Chico Buarque & Maria Bethania" show at the now-defunct Canecão venue in Rio de Janeiro, where the singers performed for several months. Gaya was the Musical Director, the conductor and did all orchestral arrangements for that engagement; the Terra Trio was the "rhythm section."

Their debut & last album was co-produced by bossa nova singer Nara Leão and composer-singer Sidney Miller. The repertoire ranges from "old" sambas (some of them composed in the 20s and 30s) to "new" sambas such as Paulinho Da Viola's "Recado," written in 1964. Ernesto Nazareth's "Odeon," a classic "Brazilian tango," dates from 1910! But the group also flirted with the tropicalia through Caetano Veloso's "Ave Maria" (from the iconic "Tropicalia" album) and Veloso/Torquato Neto's "Deus Vos Salve Esta Casa Santa," while evoking the genius Heitor Villa-Lobos' in the brilliant arrangement for Sidney Miller's "Passa Passa Gavião."

My personal favorite tracks: Herivelto Martins' "Nega Manhosa," an obscure samba but by the long-forgotten Osvaldo Chaves Ribeiro (aka Gadé) titled "Faustina," Noel Rosa/Vadico's haunting "Pra Que Mentir" (introduced by Silvio Caldas in 1939 and revived in recent years by both Paulinho da Viola and Caetano Veloso), another samba gem composed in 1956 by Paquito, Boex and Romeu Gentil titled "Era De Madrugada," and two hilarious Portuguese versions written by Aloysio de Oliveira for the standard "On The Sunny Side of the Street" (that became "A Sobrinha da Judite," previously covered by the Girls From Bahia, aka Quarteto Em Cy, on the "Revolución Con Brasilia!") and for Herman Hupfeld's (famous for the huge hit "As Time Goes By" from the "Casablanca" soundtrack, and here mispelled Hermann Heupfeld in the liner notes) "When Yuba Plays The Tuba," retitled "Zé da Tuba." Cheers!
Posted by Arnaldo DeSouteiro at 3:00 PM