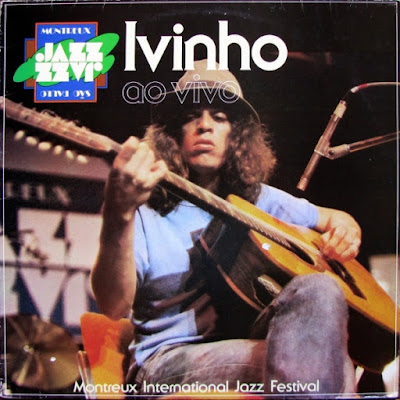 Born Ivson Wanderley Pessoa, the extremely underrated Brazilian guitarist and composer Ivinho just passed away in the night of June 12, 2015 in his native city of Recife, State of Pernambuco, at age 62. Among his fans was Luiz Bonfá, who loved his style on the 12-string guitar.

I was exposed to his brilliant artistry through the album pictured above, "Ivinho Ao Vivo" (Nonesuch/WEA), recorded live at the Montreux Jazz Festival in July 1978 when he was the opening act for the group A Cor do Som and the pop singer Gilberto Gil. At that time, he lived in Europe, after periods in Rio de Janeiro and São Paulo.

Recently, he had reactivated the psychedelic/progressive rock band Ave Sangria, and got the rights to reissue their self-ttled debut album done in 1974 for the Continental label; the CD came out in late 2004 on the Ripohlandya label that also released a double-album with live material, "Perfumes & Batachos." Among his other albums are "Caçador de Frutas" (1988) that he shared with his brother Sinay Pessoa, and "A Turma do Beco do Barato (2009)," an all-star session with reuniting the top musicians from Recife. Rest in Peace.

Posted by Arnaldo DeSouteiro at 12:26 PM