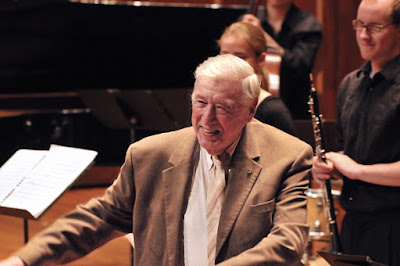 From the Ground Up and Into the Future...
In Memoriam
New England Conservatory Remembers Gunther Schuller

Gunther Schuller's family, friends, contemporaries, faculty, and students are in mourning over the news of his death June 21, but the trailblazing energy surrounding this man is so great, even his in memoriam feels like a chance for new understandings and transformation. As New England Conservatory President, Gunther Schuller steered NEC through one of the most turbulent and formative decades of American and Conservatory history, beginning with NEC's centennial year.

During his tenure as President from 1967-1977, as the Western world rocked to the rhythms of social upheaval and burgeoning youth culture, Schuller formalized NEC's commitment to jazz by establishing the first fully accredited jazz studies program at a music conservatory.

Schuller hired Carl Atkins as founding chair of the department, and worked with Atkins to develop the first curriculum and secure such legendary faculty as Jaki Byard and George Russell. Shortly thereafter, he instituted the Third Stream department (which lives on today as Contemporary Improvisation) to explore the regions where the two musical "streams" of classical and jazz meet and mingle, and hired the iconic Ran Blake to be its chair.

Schuller increased NEC's profile among the world's great music institutions in remarkable ways. He insisted from the earliest days of his tenure that contemporary music have equal billing next to the acknowledged classical masterpieces, and that students be equally adept at performing both. He bolstered and revitalized NEC's string, piano and composition faculties, hiring artists whose influence remains intact to this day, among them Frank Battisti, Frank Epstein, John Heiss, Rudolf Kolisch, Louis Krasner, Laurence Lesser, Donald Martino, and Russell Sherman.

In one of Boston's most notorious periods of racial disharmony, he created community outreach programs that sent young, eager musicians to bring the gift of music into some of the city's most marginalized neighborhoods. And, championing the forgotten music of a neglected American composer, he founded the New England Conservatory Ragtime Ensemble and recorded Scott Joplin: The Red Back Book, which won the 1974 Grammy Award for Best Chamber Music Performance, ignited a latter-day ragtime revival, and spurred tours across America, Russia, and to the White House.

Schuller's presidency was marked by unprecedented creative energy and growth, but also by controversy and fiscal distress. During the Vietnam War era, no colleges were immune from upheaval. At a time of protest "strikes" that shut down academic activities nationwide, NEC was unable to hold a Commencement for its Class of 1970 (President Daniel Steiner invited them to walk belatedly with the Class of 2000).

At the same time, music was brought into play as a creative response to war. But by the time of Schuller's resignation as President in 1977, the Board of Trustees was revitalized, a new era of financial responsibility had dawned, and applications were arriving in record numbers.

Schuller's immediate predecessor as president, Chester Williams, said, "one of his greatest contributions to the Conservatory was that he generated excitement for performing at the highest level. Holding a high level of professional achievement himself, he accepted nothing less than the best." But perhaps Schuller's greatest legacy at NEC was the personal vision of training he brought to produce the "complete musician"-one who embraced music styles of the past and present, and who looked toward the future with intelligence and artistic curiosity. NEC became less a place where the traditions of European music were conserved, and more a hothouse where exotic new hybrids could propagate and flourish.

Among recognition of Schuller's work in broad areas of music are the Pulitzer Prize in composition, Ditson Conductor's Award, MacArthur Fellowship, and NEA Jazz Masters Award. NEC bestowed an honorary Doctor of Music degree on Gunther Schuller at commencement ceremonies in 1978.

NEC's Jazz Studies Department, initially led by Carl Atkins, was the first fully accredited jazz studies program at a music conservatory. The brainchild of Gunther Schuller, who moved quickly to incorporate jazz into the curriculum when he became President of the Conservatory in 1967, the Jazz Studies faculty has included six MacArthur "genius" grant recipients (three currently teaching) and four NEA Jazz Masters, and alumni that reads like a who's who of jazz.

Now in its 46th year, the program has spawned numerous Grammy winning composers and performers. As Mike West writes in JazzTimes: "NEC's jazz studies department is among the most acclaimed and successful in the world; so says the roster of visionary artists that have comprised both its faculty and alumni."  The program is under the leadership of department chair Ken Schaphorst.

Founded in 1972 by musical visionaries Gunther Schuller and Ran Blake, New England Conservatory's Contemporary Improvisation program is "one of the most versatile in all of music education" (JazzEd).  Now in its 43rd year, the program trains composer/performer/improvisers to broaden their musical palettes and develop unique voices.

It is unparalleled in its structured approach to ear training and its emphasis on singing, memorization, harmonic sophistication, aesthetic integrity, and stylistic openness.  Under Blake's inspired guidance for its first twenty-six years, the program grew considerably and has expanded its offerings under current chair Hankus Netsky and assistant chair Eden MacAdam-Somer. 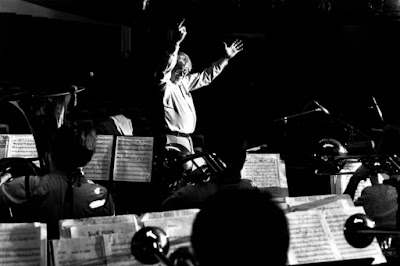 Gunther Schuller impacted the lives of many students and faculty members at New England Conservatory. Many claim his ideas as the primary foundation for all of their understandings about new music and its development throughout their entire careers. John Heiss, Ken Schaphorst, and Frank Epstein discuss their mentor, colleague and inspiration below.

Composer, conductor, flutist, and teacher, John Heiss has had works performed around the world. He has received awards and commissions from the National Institute of Arts and Letters, Fromm Foundation, NEA, Rockefeller Foundation, Massachusetts Council on the Arts and Humanities, ASCAP, and the Guggenheim Foundation. His principal publishers are Boosey & Hawkes, E.C. Schirmer, and Elkus & Son. Heiss has been principal flute of Boston Musica Viva and has performed with many local ensembles, including the BSO. Starting in the 1970s, Heiss has directed many NEC festivals dedicated to composers or themes, and has spearheaded visits to NEC by many composers, including Ligeti, Lutoslawski, Berio, Carter, Messiaen, Schuller, and Tippett.

"I knew of Gunther in New York in the '60s; he was an important figure in Jazz and Classical music. I actually met him in the happiest of ways. I was practicing playing multi-phonics on my flute at Princeton, this was normal for strings, but not for brass. Gunther called to congratulate me about an article he'd seen on this in Perspectives of New Music and asked me if I would meet him in New York the following weekend. He then asked me if I wanted a job at New England Conservatory! He hired me as a theory teacher and also nourished my young musical career. Every assignment he gave me I approached with full gusto. At the time I was hired, NEC was in trouble and Gunther came in and lit a bonfire. He created the jazz department, hired a great opera director and numerous new faculty members, many of whom stayed. I can't imagine how my life or NEC would have been without him."

"Gunther Schuller will be known posthumously as one of the greatest American composers that has ever lived...he will be around until the end of time," said John Heiss. "He was very warm, curious about everything, and so masterful about his craft - he's had a big life and an incredible life - he will be seen as a Copland or Bernstein, but he's much more avant-garde of course. Gunther brought Scott Joplin, Duke Ellington and Charles Ives back to life, because he thought they had equal stature to Beethoven."

"The memorial concert we're currently planning for November 19 here at NEC will be a 70-year retrospective of his work, performed by faculty and students, and a loving and most heartfelt tribute to his life achievement."

Since coming to NEC as Chair of the Jazz Studies and Improvisation Department in 2001, Schaphorst has directed the Jazz Orchestra in its performance of new music and traditional big band repertoire. In recent years, the ensemble has performed under the direction of guest artists Django Bates, Jimmy Heath, John Hollenbeck, Jim McNeely and Maria Schneider. Named Best College Big Band in the 2004 Downbeat Student Music Awards, the ensemble has won critical acclaim for its recordings and for its performances throughout the country. Schaphorst also works with high school-age students at NEC with the Youth Jazz Orchestra, which he founded in 2008, and the summer Jazz Lab program since 2013.

He had this to say about Gunther Schuller:

"Gunther Schuller was one of the most inspiring, contentious, honest and uncompromising individuals I've ever known. Every time I brought him to NEC to work with my students I felt as if I was being tested myself. Gunther would always let us know how we could hear better, play better and communicate the ideas of the composer more faithfully. And on the very rare instances when I prepared the students well enough, or conducted well enough to satisfy him, his words of encouragement were all the more meaningful. I'm going to miss him."

A native of Amsterdam, percussionist Frank Epstein came to the United States in 1952, settling in Hollywood, and joining the BSO in 1968. He is currently the chairman of the Percussion and Brass departments at the New England Conservatory. Epstein has made recordings with the Los Angeles Philharmonic, the BSO, and the Boston Pops, as well as with Collage New Music.  As founder of Collage, and music director from its inception in 1972 through 1991, Epstein has overseen the commissioning and performance of more than 200 new works written especially for the ensemble as well as the production of 17 recordings. Epstein was awarded a presidential commendation from NEC for his work with Collage.

He discussed how Gunther transformed his life:

"Gunther was the center of my universe musically speaking and his death will leave a huge hole in our community and one much wider in the world. He was in touch with so many people over all the years and impacted the careers of so many musicians. He has truly been an incredible force in the new music community. He will be really missed. He, more than anybody, is responsible for my views, which really started to develop 45 years ago. His view of music, all of it, should be played to the best ability possible no matter what the style or content of the material is.

"People have distinct opinions about how music should be. Gunther was very open- minded and I tend to be that way and I am open to playing all possible styles.

"Gunther helped my ensemble 44 years ago - he was the guest conductor. Many of Gunther's pieces, especially his "Grand Concerto for Percussion and Keyboards" takes you from the ground up and into the future - it's really an incredible piece." 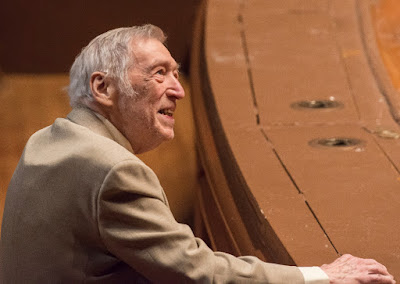 Posted by Arnaldo DeSouteiro at 11:37 PM