TBT Masterpiece - "Carlos Franzetti: You Must Believe In Spring" 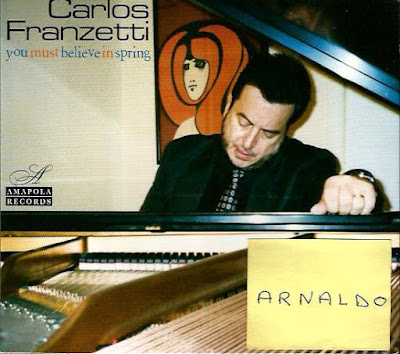 In the jazz world, few instrumentalists have been able to sing so beautifully as they play(ed): Chet Baker and Nat 'King Cole' were the most successful ones. Roy Kral, from the Jackie & Roy duo, was a great singer too, but never recorded a solo album. Others, like Oscar Peterson, hugely influenced (as a singer) by Cole, rarely recorded vocal sessions. Some - from Milt Jackson to Randy Brecker - did occasional singing adventures. What could we expect if some of the best musicians ever, like Miles Davis and Bill Evans, decided to sing? Better not.

Such vocal incursions are even rarer among arrangers. Michel Legrand loves to sing, and often does it with abandon, but usually with constraining results. Another genius, Don Sebesky, did short vocal performances in the landmark "Giant Box" album, but that was all. Actually, I would dream, for curiosity only, to listen to "vocal projects" by Claus Ogerman, Bob James or Vince Mendoza. Don't you?

Well, this gorgeous albums by Carlos Franzetti, one of the world's greatest arrangers, showcases his huge vocal talents in a surprising way. A marvelous way, indeed. I can only remember of my late friend Bobby Scott as a maestro equally capable to sing so marvelously as he composed and arranged for orchestra.

During the '70s, Scott recorded some vocal pop gems for Columbia, backed by large ensembles, but his vocal masterpieces were done in his final years, in the late 80s: "For Sentimental Reasons" and the posthomous release "Slowly," both recorded with the backing only of bass, drums and rhythm guitar for the MusicMasters label.

Franzetti achieves similar success in a trio format on this impeccable "You Must Believe In Spring" album. With unobstrusive & infallible backing by bassist Karl Kaminski and drummer Ed Uribe, he uses his velvety voice to deliver dreamy performances of such gems as Leah Worth/Bobby Troup's "The Meaning of The Blues" (one of my favorite ballads ever, here in one of its best versions ever alongside the one by Mark Murphy, not to mention the way Jim Pugh's trombone "sang" it on Woody Herman's Grammy-winning "Giant Steps" album), Richard Rodgers/Lorenz Hart's "It Never Entered My Mind," Jerome Kern/Oscar Hammerstein's "The Folks Who Live On The Hill," Leonard Bernstein's "Some Other Time" and, of course, Legrand's title track, the haunting "You Must Believe In Spring." Essential.
Posted by Arnaldo DeSouteiro at 3:00 PM