CD Reissue of the Month - "Idris Muhammad & David Matthews: Turn This Mutha Out" 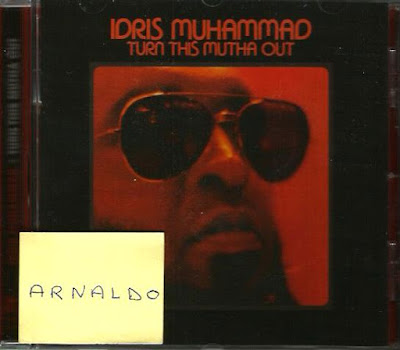 At long last, for the first time on CD: Idris Muhammad's third album for CTI's subsidiary Kudu label, after "Power of Soul" and "House of the Rising Sun," and before "Boogie To The Top." Oddly, Sony Music neither King Records, the companies that control CTI's catalog from the 70s, never had any interest in reissing it in USA, Europe or Japan, despite the fact that I had suggested it over a dozen times (as well as despite all the messages they received from customers begging for a digital reissue). The excuse: it will not appeal to jazz customers. Argh!

Finally, a miracle happened after the legendary drummer passed away in July 2014: Sony got a request from the UK label Soul Brother (the same company that released Johnny Hammond's "Gambler's Life" a decade ago, plus compilations by Esther Phillips, Freddie Hubbard, Norman, Willie Bobo, Dom Um Romão), and agreed to license the title to them. Now I have this classic jazz-funk album in heavy rotation in my CD player ("what's a CD player?" many will ask.... nevermind...)

It was not an easy task, though. "We have been trying to release it for over 7 years, so glad we finally got it," writes Laurence Prangell in his liner notes. "It has been remastered from the original tapes which were unearthed after investigation in the vaults of the label's previous distributor."

The mastering is pretty good, but there are some "problems" on the CD infos. The name of Brazilian percussion wiz Rubens Bassini was deleted from the opening track, the hit "Could Heaven Ever Be Like This," with guitarist Charlie Brown wrongly credited as percussionist on that particular track. And Tony Sarafino is not credited as lyricist on the title tune "Turn This Mutha Out."

Recorded between December 1976 and January 1977 at Mediasound and Electric Lady Studios in New York, "Turn This Mutha Out" wasn't produced by the label head, Creed Taylor. Instead, he gave the task to CTI/Kudu's chief arranger at the time, David Matthews, who was helped by Kudu's A&R man Tony Sarafino (he added lyrics to three of the tracks.) Hugely underrated here in the U.S. (altough a jazz star in Japan!), David Matthews is the unsung hero of this album, since he wrote, arranged and produced all the seven songs!!! All done specially for this project.

But Creed suggested the names of many great musicians that should be recruited to the sessions; people like The Brecker Brothers, Jon Faddis, Ronnie Cuber, Rubens Bassini (who had played on CTI dates led by Don Sebesky, Stanley Turrentine and Hank Crawford), and flutist Jeremy Steig, who was under contract to CTI. The album has that David Matthews signature Disco-Jazz-Funk sound perfected during his CTI days (when he arranged for George Benson, Joe Farrell, Ron Carter, Esther Phillips, Urbie Green, Art Farmer and Yusef Lateef, among others) after many years as James Brown's arranger and musical director.

It was well received in American and European dancefloors (specially in England), due to the marvelous opening track "Could Heaven Ever Be Like This," an undisputed dance classic. Idris, bassist Wilbur "Dud" Bascomb and Brazilian percussionist Rubens Bassini create the perfect bedrock for Michael Brecker on tenor sax, Hiram Bullock on guitar and Cliff Carter on synthesizer (who also plays the Hohner clavinet) to solo above, topped by a male vocal quartet (led by Frank Floyd) and adorned by Margareth Ross' harp. It has been sampled at least seventeen times, most notably by Jamiroquai, Drake, Jamie xx, Milk & Sugar, Lupe Fiasco and J. Cole. Absolute funkstastic.

The remaining tracks? Well, most of them sound simple in comparison to that hedonistic trip to paradise. But there are many nice moments. "Camby Bolongo" is a lovely instrumental groove featuring Randy Brecker on flugelhorn, Jeremy Steig on flute and Sue Evans on caxixi. "Crab Apple" is a wonderfully funky track with a great guitar riff (by Charlie Brown) and groove that has found favour with samplers. Michael Brecker, Hiram Bullock and Clifford Carter are the soloists. The result? It has been sampled in nothing less than19 songs (!!!), from Beck to 2Pac.

"Moon Hymn," a beautiful etherial track that features David Tofani playing the melody on soprano sax, develops into a mid-tempo funky groove, with a wild solo by Ronnie Cuber on baritone sax, but returns to a peaceful mood. The more disco-fied "Turn This Mutha Out" (propelled by Wilbur Bascomb's killer bass line, while Sue Evans shines on the cowbell, preparing the ground for a furious guitar solo by Bullock) and the electric guitar-laden swing of "Tasty Cakes" (Cliff Carter uses Rhodes & analog synths) are club floor fillers influenced by Sly and George Clinton, with lyrics by Tony Sarafino. ["Turn This Mutha Out" -- a low-slung skip through deep disco-funk pastures -- was sampled by Moodymann on "Amerika."]

The closing theme, "Say What," sounds like a rhythmic exercise over a very simple groove created by Idris on hi-hat and bass drum. David Matthews uses two acoustic guitars (by Charlie Brown and Hugh McCracken) as a carpet for solos by Eric Gale (electric guitar) and Jeremy Steig on flute. And now I feel sad when I think that most of these giants are already dead: Muhammad, Bullock, McCracken, Gale, Bassini, Michael Brecker... But the great music they've created has stood the test of time. The proof is that even "Say What" was sampled by EPMD ("Crossover," 1992), Nas ("Dr. Knockboot," 1999), Eminem ("Jealousy Woes II," 1996) and LL Cool J ("Jealous," 1989.) Could Jazz-Funk Ever Be Like This!

ps: on his autobiography, "Inside The Music - The Life Of Idris Muhammad" (the product of extensive tape-recorded interviews conducted by Britt Alexander), published by Xlibris in 2012, there's a Chapter called "Groove Ellation," on which Idriss tells he paid $80,000 cash for a tour bus to promote "Turn This Mutha Out." And there are many other great stories about his CTI sessions, Bob James, "Power of Soul" etc. Essential. 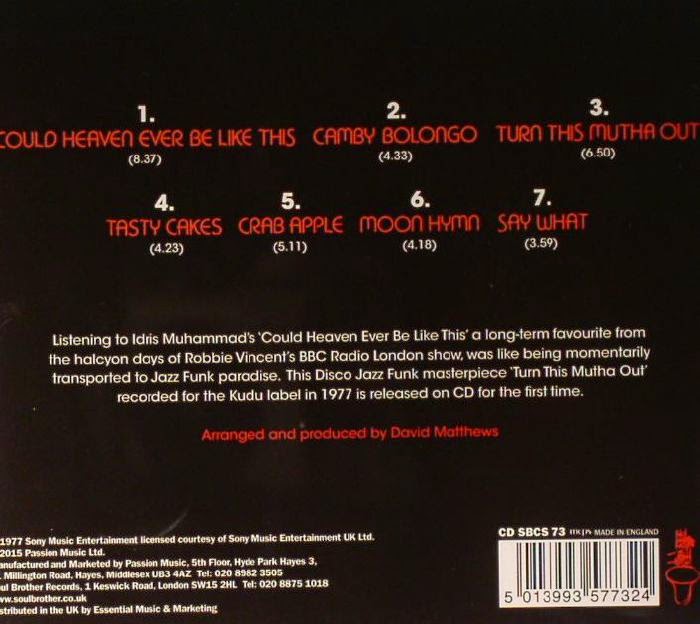 Posted by Arnaldo DeSouteiro at 10:51 PM